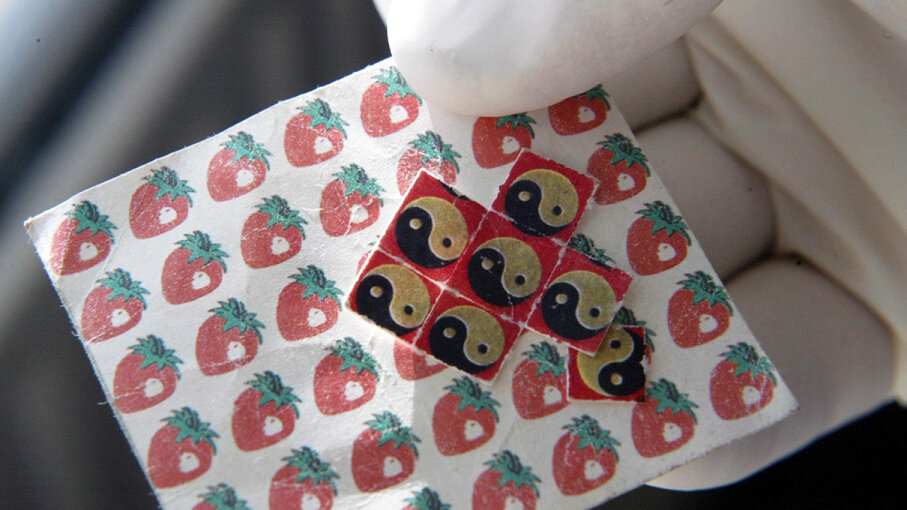 It's known as Bicycle Day — April 19, 1943. The world was caught in the desperate fog of World War II, and the dropping of the first atomic bomb was only a couple of years away.

But on that afternoon, Dr. Albert Hofmann experienced another sort of cultural tectonic shift: He became the first person to intentionally ingest the hallucinogen LSD, taking 250 micrograms at his office in Basel, Switzerland. He had discovered lysergic acid diethylamide (LSD's less-catchy scientific name) in 1938 while working as a chemist for Sandoz, but it took a while to discover what it might do to mind and body.

Hofmann, the story goes, started tripping so hard he decided to ride his bike home, seeing fantastical things all the way. Hence, Bicycle Day — to some, a grand moment in history.

Since then, LSD has occupied an uncomfortable and uncertain place. It has been hailed by some in the counterculture sphere (hello, Timothy Leary, Ken Kesey) as a mind-expander that can help humans finally reach their intellectual, mental well-being, and spiritual potential; used by the CIA as a possible Cold War weapon, testing it on prisoners and mental patients (insert evil laugh here); and experienced by still others as the purveyor of terrible black-hole trips.

The drug was banned in the U.K. in 1966, and in the U.S. in 1968. But that certainly doesn't mean it has gone away. In fact, LSD, for various reasons, is experiencing an apparent resurgence in use unseen since the psychedelic '60s.

In the past half-decade, as marijuana has led the conversation on drug legalization, LSD has found a new niche: not as a mind-blowing, cataclysmic rainbow-land trip-inducer, but as a healthy additive to life.

Specifically, microdosing LSD — taking doses so small that users don't feel the heavier mind-altering side effects — has become fashionable (nee, groovy) in Silicon Valley as a way to enhance productivity, among other things.

To hear users tell it, the many benefits of microdosing — users take, in various forms, approximately 1/10th to 1/20th the "normal" amount — include decreases in anxiety and depression, ADD/ADHD symptoms, mood disorders, PTSD and addiction; and increases in the user's creativity, focus, empathy for others and (somehow) leadership capabilities. Even world-class athletes are claiming it improves coordination and performance.

Wired has written about it. The BBC, too. So has Rolling Stone. And many other reputable media outlets. Novelist Ayelet Waldman even wrote a book about microdosing — claiming, among other things, it saved her marriage to Pulitzer Prize-winning novelist Michael Chabon.

It's probably not surprising, but worth noting, that Reddit has a board dedicated to LSD microdosing. And major websites like The Third Wave are dedicated to promoting the good LSD word.

At the same time, a small groundswell of activist-experts, with decades of informal studies overflowing their offices, are calling for more funding for clinical research to — finally, thoroughly — determine LSD's potential benefits and dangers.

Here lies the crux of LSD's current state: On one side stand the believers of the yet scientifically unproven physical and mental health benefits of LSD, those who seek a relaxing of drug laws to promote clinical research. On the other, the sober cynics who say there's nothing to discover, that LSD is just a dangerous (and potentially deadly) drug, and it would be foolish to throw more money toward microdosing and other such uses.

The LSD microdosing crowd has a few outspoken proponents — notably, James Fadiman, an American psychologist and writer who in 2011 published "The Psychedelic Explorer's Guide: Safe, Therapeutic, and Sacred Journeys." His work has since been expanded to a website that includes a volunteer LSD-microdosing study with more than 1,500 volunteer participants and their anecdotal feedback.

Amanda Feilding is another LSD champion. She founded and runs the Beckley Foundation, a UK-based think tank which, among other things, seeks more research into psychedelics like LSD, "so that we can better harness their potential to improve the human condition."

Currently, Feilding is heading something called the Beckley/Imperial Research Programme, which is described as "the world's first scientific study into the efficacy of microdosing, using the ancient Chinese strategy game of Go to investigate whether small doses of LSD can enhance intuitive pattern recognition and creativity."

Feilding, who first took LSD in the mid-1960s and has since devoted more than 30 years to studying it, says the Beckley/Imperial work is originally inspired by her own experiences.

"I used to be a keen Go player," she said when reached by email, "and I found that I won more games when I was on LSD if my opponent wasn't, indicating to me its power to increase intuitive pattern-recognition and creativity."

The study, Feilding said, will be the first to use brain-imaging to investigate the effects of microdosing LSD. "It would be great to get scientific verification that microdosing does indeed improve mood, health, cognitive functioning and productivity," she said.

Then there are those less inspired by LSD stories and claims. David Nichols, an American pharmacologist and chemist who has spent decades researching the potential of psychedelics (and with an extremely atypical government license to do so), is not yet willing to ride the current wave of pro-microdosing thinking.

"I have my doubts that microdosing works, and there is no research on it to show that it does anything," he said by email. "It seems to have caught on, but like a lot of fads, I am not sure it will last."

Anecdotes about LSD, he says, "don't carry much weight in the world of real science."

Feilding and Nichols, then, do agree on one thing: More clinical research needs to be done. They just don't agree on the value of said research.

"You really need a clinical study comparing, for example 5, 10, and 15 micrograms of LSD to a placebo, using some complex cognitive tasks," Nichols said. "For measuring cognition, you'd probably need maybe 20 subjects. It would be very expensive, with no useful outcome to be anticipated."

Feilding realizes these challenges, and others. "Over half a century of extreme prohibition [of LSD] casts a long shadow," she said. "Among the many ills brought about by the War on Drugs is the fact that research into the healing potential of these compounds and cannabis has been virtually blocked, so that millions of people have been deprived of psychedelic-assisted therapy which could have improved or healed their conditions, and alleviated their suffering.

"On a very practical level, there is a serious lack of funding, and scientific studies are very expensive," she said. "Finding the funding becomes an ever bigger hurdle."

The Future of LSD

Feilding remains optimistic, though, as she promotes her LSD brain-imaging study and anticipates the results. In part, she says the time is finally right for a reconsideration of LSD.

"With cannabis laws continuing to change around the world, research will have a chance to catch up," she said. "The more evidence there is, the stronger the case for further investigation and for giving patients access to potentially life-changing treatments. "I believe LSD will become an accepted therapeutic medicine within the next 10 years," Feilding said.

Nichols is doubtful. "Even if a clinical trial indicated it had some sort of stimulant effect," he said, "I doubt that it would ever be approved as a drug. If you gave someone a prescription for ten 10 microgram tablets, they could just take all ten at once and get a strong LSD effect."

In short, though our relationship with LSD began on a bicycle nearly 80 years ago, the long trip continues.

Now That's Trippy
Mark McCloud, of San Francisco, runs out of his house what he calls the Institute of Illegal Images — over 33,000 sheets of acid, or several million hits of the stuff. The purpose of the collection? Not to sell or use — but to showcase the wide-ranging art found on the sheets through the years, some of which can be viewed on an accompanying website.