Browse the article If the Idea of a Phone Call Triggers Serious Anxiety, You're Not Alone 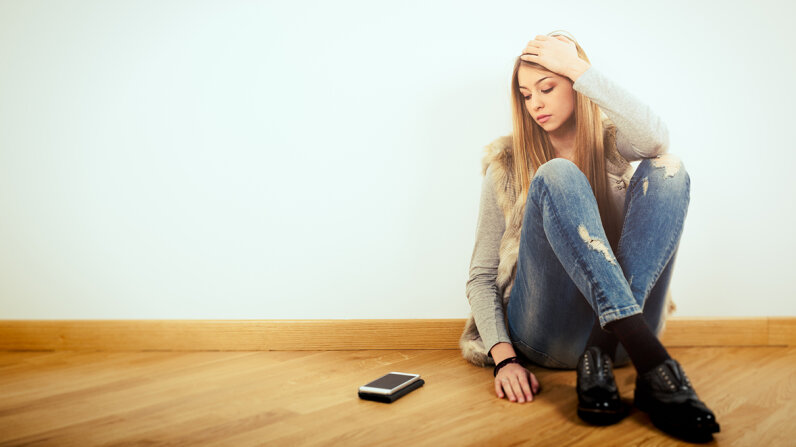 Does the ring of a telephone give you an instant case of serious anxiety? You're not alone. Lara Belova/Getty Images

Over on Reddit, the corner of the internet where you can find somebody to opine about anything, there's a subreddit called "Telephobia." The description of the online community assures those suffering from a fear of talking on the phone that living in dread of unexpected phone calls is "completely normal, and more common than you think, even among people who have no problem talking to people in real life."

These days it's perfectly possible for many people to avoid answering or making telephone calls completely — that's why we have email and text message and social media platforms and brunch. But still, there's something about the telephone that terrifies some people so completely that they obsessively anticipate phone calls and strategize about how best to avoid them.

The element of the unknown, and a lack of control, contributes to the anxiety induced by a ringing phone.
Movie Poster Image Art/Getty Images

A fear this intense and persistent could be classified as a phobia by the Diagnostic and Statistical Manual of Mental Disorders, 5th Edition. For people with telephobia, the prospect of talking on the phone almost always provokes immediate fear or anxiety: They might feel too much discomfort to on the phone even if it's the last time they'd be able to speak with their dying grandmother, for instance. They might even lose their job over a refusal to make or receive phone calls.

But where would a phobia like this come from? After all, a phone can't bite you like a spider; you can't fall off it like a tall building; and it doesn't really have the potential to become a twisted ball of flaming, airborne metal like an airplane. According to Dr. Patrick McGrath, clinical director for the Center for Anxiety and OCD at Amita Health, and a spokesperson for the Anxiety and Depression Association of America, phone phobias could be more related to social anxiety or a specific traumatic event.

"Many people with social phobia hate the phone," says McGrath. "They will not make calls for general information, fearing they may be wasting someone's time. Or maybe they once picked up the phone and got really bad news, or they were on the phone while driving and got into an accident — the phone could remind them of a past traumatic event."

According to McGrath, one treatment for phobias like this is type of therapy called exposure and response prevention therapy, in which people gradually work up to doing the things they fear. For instance, a patient with a phone phobia starts by calling a local store to ask what time it closes, or if a certain item is in stock. Later they call a restaurant to ask about the day's specials. After listening to the answer, they say "thank you" and hang up.

"The patients fear that the person on the other end of the line will now hate them and be angry that they wasted their time," says McGrath. "Of course, those people have no idea who made the call, but that doesn't matter. Just knowing someone might be angry at them is frightening enough. Later we have them call family members and old friends that they haven't talked to recently, so that they can practice social conversations. Then we do mock phone interviews with them for practice with initial job interviews."

All this makes sense for those with extreme social anxiety, but what about for people who fear and detest phone conversations, but are otherwise perfectly capable and comfortable in-person and written communicators?

Fear of phone conversations can be treated with a therapy approach known as exposure and response prevention.
Adrianko/Cultura RF/Getty Images

There could be a number of things going on here, McGrath says. It may be as simple as someone hating the way their own voice sounds, or getting very used to being able to review texts, emails and social media posts before they're sent, so a phone conversation seems risky and spontaneous.

Fear of the telephone also reflects problems unique to the experience of talking to somebody you can't see:

"Some people dislike talking on the phone because of the lack of social cues you can get from talking in person," says McGrath. "For someone with a phone phobia, a video call might be easier than a phone call because you can get the associated facial and visual cues that you do not get over the phone."

Now That's Interesting
Far from being telephobic, Richard Nixon preferred taking his meetings over the phone. Between 1971 and 1973 he surreptitiously recorded 3,700 hours of phone conversations with everyone from journalists to top aides. Later, Nixon said he did it because he wanted his administration to be "the best chronicled in history." His predecessor Lyndon B. Johnson was also particularly telephilic.