by Laurie L. Dove Jun 7, 2016
Anxiety over using a public bathroom affects some, but not others. Why is that? Joey Boylan/Getty Images

Why is it so worry-inducing to poop in public restrooms? Few people look forward to getting caught with the urge while they're away from home, but for some, it can cause life-changing anxiety.

"I have patients who have gone all the way back home to use the bathroom. I have individuals who will wait until the bathroom is free before they can use it. I have people who have 'secret' bathrooms in their office buildings so their co-workers can't hear or smell them in the bathroom," says Dr. Frank J. Sileo, a New Jersey psychologist, author and speaker.

Toilet anxiety is a broad term used to describe a number of different issues related to using public restrooms. For some, it means just being unable to poop away from home. For others, it means they can't relieve themselves in a public restroom at all — neither feces nor urine — which can become a potentially physically damaging problem. Where does this anxiety stem from?

"People are embarrassed by the smell and sounds of going to the bathroom," says Sileo. "This is probably one of the greatest contributors to bathroom anxiety. It makes people feel vulnerable."

The fear of, or inability to, defecate with other people nearby, is called parcopresis. It also has ties to underlying conditions, such as a generalized social anxiety and obsessive-compulsive disorder (OCD),  in which people repeatedly perform certain routines or experience certain thoughts.

"Conditions such as OCD with a germ focus can often be associated with bathroom anxiety," Sileo says. "For someone with OCD and a fear of germs, bathrooms are just another place where they experience their anxiety. Let's face it, many public restrooms are not the cleanest. So many rituals, as far as touching the door handle, not sitting on the toilet, clothes touching the toilet and the floor at times, flushing the toilet ... all create anxiety."

While there are an unknown number of people who are only able to have a bowel movement in toilets they consider safe and private, the International Paruresis Association estimates that about 220 million people worldwide — about seven percent of the global population — is affected by paruresis, the inability to urinate in public toilets.

Dr. Simon Knowles, an international expert on the toilet anxiety, reports that little research has been conducted on paruresis since the condition was first identified in 1954. As for parcopresis, it's barely a footnote. This is something that Knowles — a clinical psychologist and senior lecturer at Australia's Swinburne University of Technology — is working to change through the use of a psychological scale that will allow objective and consistent measurement of shy bladders and bowels.

Only a few isolated studies have taken a closer look at the use of public toilets. For example, the May 1976 Journal of Personal Social Psychology reported on men's urinal etiquette. The U.S.-based study deployed a volunteer to enter a men's restroom and stand at the urinal either next to or one over from an unsuspecting man who was urinating while a researcher hid in a toilet stall to watch. The study discovered that the closer the volunteer stood to the urinating men, the longer it took them to pee.

And a 1985 study points to behavioral boundaries that seem to be just as necessary as the physical security a bathroom stall provides. For example, posits the study, friends entering a bathroom usually stop talking upon entering bathroom stalls. And strangers, it seems, enter into a social contract in which they take note of each other, then act as if each are completely alone.

It's not always the proximity of other people that introduce anxiety. A 2012 British Journal of Criminology study interviewed men and women using one of 20 public toilets. Men had increased anxiety about physical assault, or that they would be watched or get caught watching others, while women were more social with strangers, focusing primarily on cleanliness.

Cleanliness — or lack thereof — cannot be ruled out as a factor in fear of public restroom use. Even for people who don't commonly experience general toilet anxiety, a particularly filthy public loo may inspire serious specific concern.

Now That's Cool
The app Sit or Squat uses crowdsourced information to map restrooms all over the world; users can enter a general location on the website and find the nearest restroom, view photos and read reviews.

Scientists Prove Schrodinger's Cat Can Be in Two Places at Once

Stuff Mom Never Told You: Who Spends the Most Time on the Toilet? [VIDEO] 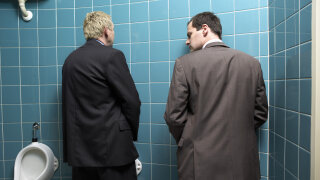