Can body modifications be addictive? 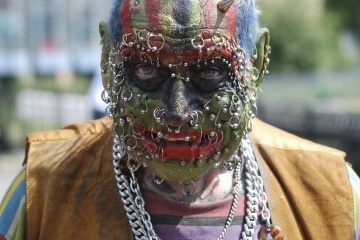 We're not sure if this guy is addicted to body modifications, but it sure seems like he loves them.
Trevor Smith/iStock/Thinkstock

Have you ever noticed that people with tattoos usually have more than one? Or, if they only have one, they usually plan on getting another someday? Many feel the same about body piercings as well -- unwilling to stop at just one. Is this simply an affinity for body modification or an actual addiction?

In a 2010 study, 23 percent of Americans reported having at least one tattoo, and 8 percent reported sporting a piercing other than in the earlobe [source: Pew Research Center]. You might say, "I'm totally addicted to tattoos" in a lighthearted way, but some psychologists believe there's some truth to this statement. One reason? Endorphins. Let's take a closer look.

Because body modifications such as tattoos, piercings or branding cause some pain, the body releases endorphins in response. Many call endorphins "the body's natural pain fighter." When your body feels pain, it releases endorphins, which communicate with the opiate receptors in the brain. That's right -- endorphins actually behave similarly to drugs such as morphine and other painkillers. You may have heard of "runner's high." It's a real thing, a result of pushing the body through stress and pain. In addition to pain management, release of endorphins also benefits the body by:

However, endorphin release isn't the only reason people may find themselves returning to a tattoo or piercing parlor. The need for self-expression, the desire to join the body modification culture or an urge to display art on the body are all valid and common reasons for tattoos and piercings.

Several life-altering issues characterize true addictive behavior. Keep in mind we're not talking about substance abuse but about compulsive behaviors. If the need for an act -- such as repeated body modification -- becomes uncontrollable and interferes negatively with life responsibilities, health and interpersonal relationships, psychologists consider it a psychological addiction. At this point, it's no longer pleasure seeking but a compulsion [source: Psychology Today].

It's true, in extreme cases, that body modification can be addictive. Many point to the case of Dennis Avner, who spent years and lots of money attempting to make himself look like a cat. He even had his teeth filed into points and whiskers implanted into his cheeks. After dying of an apparent suicide in 2012, some doctors wondered if he struggled with body dysmorphic disorder [source: Youn].

The takeaway? Body modifications, in the majority of cases, aren't addictive. However, if you frequently feel an overwhelming urge to get them and it's negatively affecting your life, you may be exhibiting addictive behavior.

Which Country Is the Most Empathetic? (Hint: It's Not the U.S.)
Will you die if you never sleep?
Is there a link between depression and menopause?