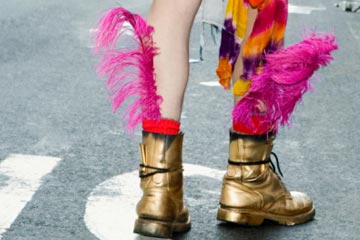 This girl isn't likely to fall into a personality type that values conformity.
Medioimages/Photodisc/Thinkstock

Throughout recorded history, writers and storytellers around the world have populated their myths, legends and adventures with distinct characters that each have specific traits. Regardless of the era or location of the tale's origin, heroic characters from one tale share traits with heroic characters from another tale, and the same holds true for the fool of the tale, the helpful assistant and the bad guys.

These archetypes (prototypes of different personalities and life paths) pop up again and again throughout ancient and modern storytelling, religion and even the naming of children (nobody names their son "Hunter" in hopes that he'll languish in middle management one day).

Though often passed off as "ancient knowledge," the personality types were actually developed fairly recently (though the enneagram shape itself has been around at least as long as Pythagoras).

Ichazo developed more than a hundred different enneagrams, categorizing nine different "Personality Types," "Holy Ideas," "Ego Fixations," "Passions," "Virtues" and so on. Since its invention, this system of personality types has been expanded upon and analyzed by spiritualists and psychotherapists alike.

Let's take a brief look at the different types.

Now that we know the origins of the enneagram personality types, let's take a closer look at each one:

You may be able to immediately pick out your personality from this list, or relate to several. So what good could come of any of this? Keep reading to find out.

Learning About Yourself with Enneagrams

Some people believe that by revealing your specific personality type, enneagram personality types can help you gain a better understanding of yourself. Psychologists such as Carl Jung have long studied personality types and identity archetypes, and corporations even use personality tests like the Myers-Briggs Type Indicator as a means of identifying applicants' and employees' probable strengths and weaknesses.

While it's hard for us to generally identify our own specific personality traits and faults with much accuracy, those around us have a much easier time pegging us for what and who we are [source: Washington University in St. Louis]. This blindness to oneself can lead to a worsening of negative traits that have gone unchecked, or a lack of confidence in one's positive traits. Using the enneagram personality types might enable a person to spot his or her type through either the identification of positive or negative traits. The person might also be able to identify corresponding traits for that type that may have gone previously ignored or unacknowledged.

Studies have shown that we alter our perceptions of physical attractiveness once we learn more about a person's personality -- positive personality traits like helpfulness make people more attractive to others, while negative personality traits like selfishness or pettiness make others lower their perception of how physically attractive that person is [source: Blackwell Publishing]. Your personality even plays a role in the likelihood of having children. Those who are more aggressive and show leadership skills (such as the Reformer, the Challenger and the High Achiever) tend to be more successful in their quests for producing offspring [source: Wiley-Blackwell].

What's the bottom line? Learning more about your personality type may help you to be more self-aware -- and make your interactions with other people a little smoother.

According to Lisa Oz's book, "Us: Transforming Ourselves and the Relationships that Matter Most," some famous "Caregivers" (enneagram personality type 2) in history include: Mother Teresa, Florence Nightingale and the Biblical Martha, who's described in Luke 10:40 as "busy about much serving."