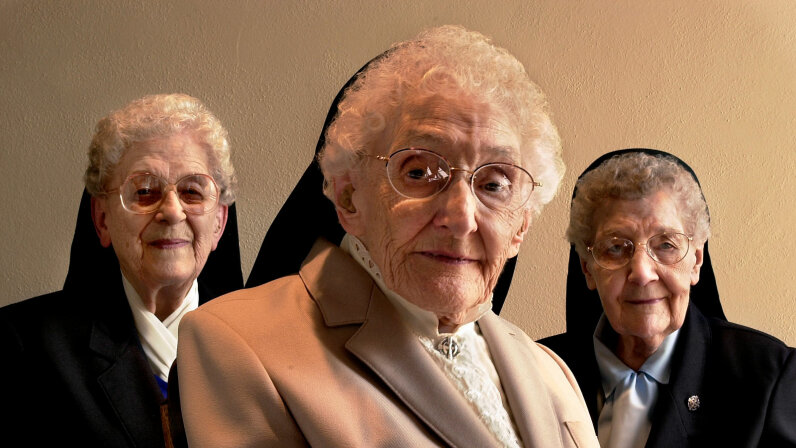 Sister Nicolette, 94, (center) and fellow elderly nun subjects at the School Sisters of Notre Dame convent in 2001 where a long-term study of Alzheimer's disease has been conducted since 1986 and still goes on today. Steve Liss/The LIFE Images Collection via Getty Images

Speaking an extra language or two is more than just a cool party trick. It turns out that multilingualism may have a protective effect against dementia, according to data from a recent study out of The University of Waterloo in Canada. It was published in the Journal of Alzheimer's Disease in September 2019.

This effort looked at data from 325 Roman Catholic nuns who were members of the School Sisters of Notre Dame order in the U.S. The study found that 31 percent of nuns who spoke only one language developed dementia, compared with only 6 percent of nuns who spoke four or more languages (proficiently, but not necessarily on a daily basis). This lends further credence to the belief that extra brain use can somehow ward off dementia.

"Language is a complex ability of the human brain and switching between different languages takes cognitive flexibility. So, it makes sense that the extra mental exercise multilinguals would get from speaking multiple languages might help their brains be in better shape than those who speak only one language," says study co-author and University of Waterloo associate professor Dr. Suzanne Tyas in an email. "This is consistent with recommendations to remain cognitively active as a strategy to prevent dementia: it's well established that when it comes to the brain, it's 'use it or lose it.'"

Although it might seem random to look at nun data, rather than that of the general population, it's actually the unique situation of sisterhood that makes their data extra useful. The Waterloo study is but one prong of the internationally acclaimed "Nun Study," which started in 1986 with a small group of sisters, but has since expanded to cover nearly 700 Catholic nuns across the country. So far, the Nun Study has helped scientists better predict how cognitive and linguistic abilities factor into Alzheimer's and other types of dementia risk. In addition, scientists are gaining a better understanding of how incidence of neuronal hypertrophy (increase in certain nerve cells in the brain) factors into Alzheimer's disease development and progression.

"What makes them [nuns] such a valuable group to research is that they share very similar adult lives, including factors such as income, social support, marital status, reproductive history, alcohol and tobacco use, and access to health services," says Tygas. "So, in the Nun Study, we have a greater ability to focus on multilingualism without it being influenced by all these other factors that usually vary from person to person during adulthood and that can weaken other studies."

These similarities made the nuns perfect for the study of how multilingualism affects dementia. "People who speak multiple languages differ from those who speak only one language in many characteristics, and it's important to be sure we are truly looking at the effect of multilingualism and not the effects of those other characteristics," Tyas says.

But it is also possible that the brains of multilingual people are structured to fight back against dementia, and that's why they enjoy lower risk. "This is similar to interpreting the established protective impact of higher levels of education on dementia: We cannot say whether it is the education itself or the fact that people who attain higher levels of education may be different, and it is those differences that explain the reduced risk of dementia," Tyas explains. However, a study to definitively determine this (where one group learns a new language and another does not and the researchers follow up later) would be extremely difficult to pull off.

Don't fret too much if multilingualism isn't your bag, however. "Multilingualism is only one of a growing list of strategies that people can use. Dementia is more preventable than people realize," Tyas says, noting that certain health choices provide protection, including lots of physical and mental activity; a good social network; eating well and controlling health conditions such as high blood pressure.

A bonus finding of the study is that other forms of linguistic ability, such as writing, could actually be more important than speaking several languages. The researchers discovered this by looking at the autobiographical essays the nuns wrote as young adults before taking vows, which were decades old. Each essay was analyzed in regard to the structure of the writing, idea density, grammatical complexity and general content.

"We found that when we looked at these measures together, written language ability had a stronger protective effect on dementia than multilingualism," Tyas says. "Previous studies have not looked at multilingualism in the context of other measures of language ability, and this looks like a promising direction for future work. And, for those not interested in speaking more than one language, exercising language abilities in other ways may also be helpful in reducing the risk of dementia."

Now That's Interesting
Most people think of Alzheimer's when the topic of dementia comes up, but it's actually only one of more than 400 types of the disease! Vascular dementia and Alzheimer's are the most common of those.

Millions Are Texting — Instead of Calling — Crisis Hotlines
D.C. Home to Most Psychopaths, Study Finds
The Human Heart Can Literally Burst With Joy, New Research Finds