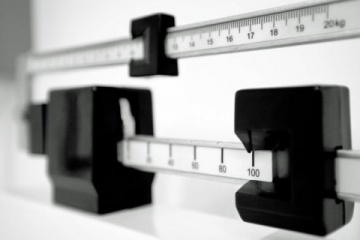 Being obsessed with body weight and body size are signs of an eating disorder. Learn about other symptoms and tests that can be performed for diagnosis.
Hemera/Thinkstock

Because consequences of eating disorders can be severe, early diagnosis is crucial. Between one and two of every 10 cases of anorexia leads to death from starvation, cardiac arrest, medical complications or suicide. Eating disorders in general can disrupt physical and emotional growth in teenagers and can lead to premature osteoporosis, a condition where bones are weakened and more susceptible to fracture; increase infertility; and raise the risk of miscarriages or low-birth-weight babies. Anorexia may be especially deadly for women with insulin dependent diabetes if they omit or under-use insulin to control their weight. Insulin therapy can, sometimes, cause weight gain but changing insulin dosages to lose weight can be very dangerous and life-threatening.

Among the physical effects of anorexia are:

Women with anorexia have an intense dread of becoming fat. Food and body size become obsessions. It is common for women with anorexia, for example, to collect recipes and prepare gourmet meals for family and friends, but not eat any of the food themselves. Instead, they allow their bodies to wither away and "disappear," gauging their hunger as a measure of their self-control. Women with anorexia diet, not to lose a few pounds, but because they want to improve their feelings of self-esteem and love. Depression and insomnia often occur with eating disorders.

If you have anorexia, you may tend to keep your feelings to yourself, seldom disobey authority and are often described as "too good to be true". You also are likely to be a perfectionist, a good student, and excellent athlete. Anorexia is common in dancers and competitive athletes in sports such as gymnastics and figure skating where success depends not only on athletic performance, but on having the "perfect" body, as well.

Symptoms of anorexia nervosa can include:

Bulimia nervosa involves using diet for emotional control. Binging becomes a way to relieve stress, anxiety or depression. Purging the calories relieves the guilt of overeating. It becomes a habit. Women with bulimia are usually more impulsive, more socially outgoing, and less self-controlled than those with anorexia. They are also more likely to abuse alcohol and other substances.

Bulimia is harder to recognize than anorexia. Generally, the symptoms are subtle, and bulimic women aren't necessarily thin. Even so, if you have bulimia, you may be starving nutritionally because you are not getting the vitamins, minerals and other nutrients you need.

Symptoms of bulimia include:

Among the physical effects of bulimia are:

Still, the outlook for bulimics is generally better than it is for anorexics. Women with bulimia are less likely to require hospitalization, although 20 percent of women still struggle with the disease after 10 years.

Symptoms of binge eating include:

Medical consequences of binge eating are:

Your health care professional may draw some of your blood to conduct the following tests to assess your likelihood of having an eating disorder:

Your health care professional may also take a blood pressure reading, a bone density test and an electrocardiogram, which finds heartbeat irregularities.