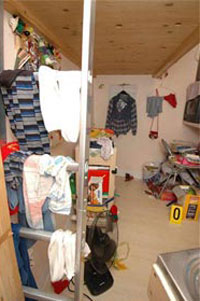 Ten-year-old Natascha Kampusch disappeared on her way to school in Austria in 1998. In 2006, 18-year-old Natascha Kampusch reappeared in a Vienna garden after escaping from her captor's home while he wasn't paying attention. In a statement to the media read by her psychiatrist, Kampusch had this to say about spending eight years in a locked cell beneath her kidnapper's basement: "My youth was very different. But I was also spared a lot of things - I did not start smoking or drinking and I did not hang out in bad company." By most experts' accounts, Kampusch is in a traumatized state and appears to be suffering from Stockholm syndrome.

People suffering from Stockholm syndrome come to identify with and even care for their captors in a desperate, usually unconscious act of self-preservation. It occurs in the most psychologically traumatic situations, often hostage situations or kidnappings, and its effects usually do not end when the crisis ends. In the most classic cases, victims continue to defend and care about their captors even after they escape captivity. Symptoms of Stockholm syndrome have also been identified in the slave/master relationship, in battered-spouse cases and in members of destructive cults.

Many people have a pretty good idea of what Stockholm syndrome is based on the origin of the term alone. In 1973, two men entered the Kreditbanken bank in Stockholm, Sweden, intending to rob it. When police entered the bank, the robbers shot them, and a hostage situation ensued. For six days, the robbers held four people at gunpoint, locked in a bank vault, sometimes strapped with explosives and other times forced to put nooses around their own necks. When the police tried to rescue the hostages, the hostages fought them off, defending their captors and blaming the police. One of the freed hostages set up a fund to cover the hostage-takers' legal defense fees. Thus "Stockholm syndrome" was born, and psychologists everywhere had a name for this classic captor-prisoner phenomenon.

In order for Stockholm syndrome to occur in any given situation, at least three traits must be present:

Included in these traits are the prisoner's belief (correct or incorrect, it doesn't matter) that he or she cannot escape, which means that survival must occur within the rules set by the all-powerful captor; and the prisoner's isolation from people not being held by the captors, which prohibits any outside view of the captors from infringing on the psychological processes that lead to Stockholm syndrome.

In the most basic, generalized way, the Stockholm syndrome process as seen in a kidnapping or hostage situation looks something like this:

If you've read How Brainwashing Works, you've probably noticed the similarities between brainwashing and Stockholm syndrome. The two are actually closely related as effects of abnormal power relationships. In the case of publishing heiress Patty Hearst, who was kidnapped in the early '70s by the political extremist group SLA (Symbionese Liberation Army), experts have pointed to both Stockholm syndrome and brainwashing as potential reasons for her subsequent actions. After Patty was locked in a closet and severely abused for weeks on end, she joined the SLA, changed her name, became engaged to one of its members and was caught robbing a bank with the group. However, once the police arrested members of SLA and Patty was returned to her family, she reversed her position. Instead of defending the group and holding the police officers in contempt, she distanced herself from the SLA and condemned their actions. It's possible that what Hearst experienced was in fact neither true brainwashing nor Stockholm syndrome, but instead was a series of conscious choices designed to ensure her survival.

For more on brainwashing and related topics, check out the links that follow.

10 Surprising Ways to Lose Your Mind
Could Three Days in This Swedish Cabin Reduce Anxiety?
The Human Heart Can Literally Burst With Joy, New Research Finds

Is there a blood test for depression?
Social Jet Lag May Be Bad for Your Heart
Alzheimer's Overview