Browse the article What is landsickness? 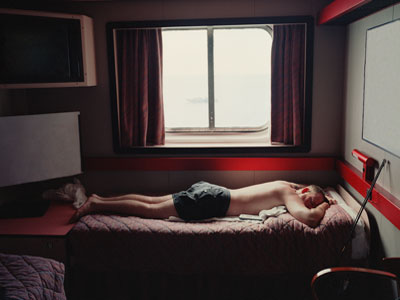 Seasickness can quickly take the pleasure out of a pleasure cruise.
Beth Perkins/Getty Images

The movement of a boat on water can easily lead to motion sickness, or in this case, seasickness. This is a condition in which your inner ear and eyes, the parts of your body that detect motion, send conflicting messages to the brain. The system in your body that keeps you from falling over when you're walking down the street is called the vestibular system. Your eyes and a section of your inner ear called the semicircular canal are the main players here. Inside the canal are tiny hair cells that detect the movement of fluid. It's this movement that's sent as a message to the brain by way of some auditory nerves. Lean over to the left, the fluid sloshes in that direction and your brain understands that you're leaning to the left, even if your eyes are closed. Motion sickness throws a wrench in this process. If you see one thing with your eyes and your inner ear senses another, your brain won't understand which signal to process.

Let's say you're in a windowless cabin of a small cruise ship and you're being tossed to and fro. Your eyes tell the brain "I'm just sitting still here on the bed" while your inner ear screams "will somebody please steady this ship!" Your semicircular canal feels the motion of the boat without being able to see the horizon moving up and down. Sometimes seeing the horizon is enough to get seasickness in check. For others, it could mean using any or all of the following:

­Seasickness means nausea, dizziness, vomiting, fatigue and headaches. The good news is that once you're back on land, the condition eventually goes away. It usually doesn't happen immediately though -- most people experience brief lingering effects. These effects can last a few hours or a day or two. In these cases there's really nothing to worry about. But what if your seasickness persisted for weeks, months or even years? And what if the only thing that made you feel better was being in motion? It turns out there's such a condition. It's called Mal de Debarquement syndrome. 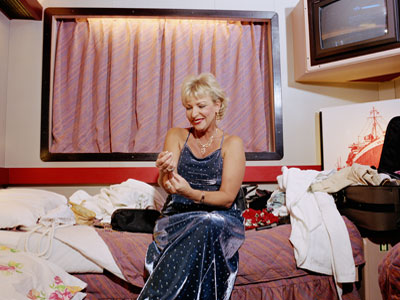 This middle-aged woman in her cruise ship cabin fits the profile and may end up wobbly back on land.
Andreanna Seymore/Getty Images

Mal de Debarquement syndrome (MDD) is a rare condition in which motion sickness continues for an extended period of time on land after being out at sea. The French term is literally translated as "sickness of disembarkment." Not much is known about MDD at this point, and there are few theories about what's going on. It's similar to seasickness in that the sufferer feels a constant rocking sensation. But there isn't the vomiting, spinning, double vision, cold sweats or ear pain that can be associated with motion sickness. Victims of MDD have likened it to walking on a mattress or a trampoline.

The wobbly feeling is constant, but varies in severity from hour to hour. This is the really odd thing about MDD -- it's most pronounced when the person is sitting still. Riding in a car can actually help to relieve the symptoms. This leads researchers to believe that the brain may be stuck believing that the rocking motion experienced at sea is normal and that being on land is disorienting. The most frequent sufferers are middle-aged women who have been on at least a seven-day cruise. Research hasn't turned up any clues as to why it's predominantly this demographic. Women with MDD have been tested to see if hormones have anything to do with it, and results have been inconclusive.

MDD usually gets worse as the day goes on, which doctors believe may have something to do with fatigue and stress. Studies of the syndrome are few and far between, but most information seems to indicate that the problem doesn't lie within the vestibular system, but in the brain itself. One reason for this hypothesis is that motion sickness remedies and medications have no effect. Dr. Timothy Hain, a neurologist at Northwestern University, and an aeronautics engineer with credentials from MIT and NASA have constructed one of the leading theories about MDD. They believe that the brain forms internal models to deal with an unusual environment like being out in a rocking ship. As the model gets more accurate, the likelihood that the person will get seasick decreases. They theorize that people who don't surrender these models once on land suffer from MDD.

Another neurologist in Haifa, Israel, performed a test on people who have suffered bouts of MDD. He gathered an equal number of sufferers and non-sufferers, did some neurological tests on them and sent them out to sea. He retested them when they got back on terra firma and found that the MDD victims used less input from their vestibular system to maintain balance. While the mechanism behind this finding is unknown, it does agree with Hain's theory about the brain being the problem, not the inner ear.

­There's no definitive test for diagnosis, but ­MRIs, audio and balance tests are usually performed. Most times, it's simply diagnosed by the patient's history -- in other words, the fact they they've just returned from a long cruise. There isn't any treatment or medication that works across the board, but physical therapy has helped to relieve symptoms in some cases. Valium and drugs similar to it can also help to mute the symptoms, but doctors aren't sure why. And there's a concern that valium could prolong the condition in the long run. In most cases, the symptoms eventually go away after a period of weeks or months. The most severe cases last years. Pinpointing the exact problem within the brain through more research could lead to an effective treatment.