Does living together before marriage lead to divorce? 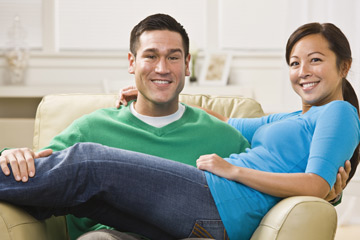 So happy together? See more pictures of kissing.
© 2009 Jupiterimages Corporation

Before we plunk down our hard-earned money, we consumers like to know that we'll be happy with our purchases. Few people buy clothing or shoes without trying them on, and you'd likely never go through the hassle of buying a car without a test drive first. Grocery stores offer samples to get consumers to try new products, and electronics stores let you play with cameras, computers and video games so you'll know what you're getting.

In our try it before you buy it culture, it makes sense that couples would choose to live together before committing their entire lives in marriage. After all, if you're not compatible, why spend all that money for the wedding and the inevitable divorce? Living together before marriage is a relatively new concept in the United States, though. While countries around the world adopted the practice with gusto decades ago, U.S. couples who cohabited were seen as "living in sin." In the 1970s, only about 500,000 couples lived together before tying the knot, but now, upwards of several million couples will [source: Wartik]. According to one estimate, 60 to 70 percent of today's couples will share a residence before marriage [source: McCarthy].

You might think that with more couples road-testing their cohabitation compatibility that divorce rates would fall? After all, there are no surprises -- you've shared a bathroom and you know just how many cups of coffee your beloved needs in the morning. However, numerous researchers are finding that couples who live together have a higher rate of divorce than couples who don't cohabit before marrying. And prior to the divorce, these couples have lower rates of marital satisfaction. Why is this?

Premarital Cohabitation and Risk for Divorce

The most recent study about premarital cohabitation was conducted by researchers at the University of Denver (DU) and published in July 2009. The researchers conducted telephone surveys of couples who had been married for 10 years or less and asked about marital satisfaction and whether divorce had even been considered. According to their findings, 19 percent of the couples who'd lived together before marriage had contemplated divorce, compared with 12 percent of couples who'd lived together after their engagement and 10 percent of couples who didn't share space until after marriage [source: Bryner]. Additionally, the couples who lived together pre-marriage reported lower levels of marital satisfaction. The DU results are consistent with other studies on the subject, which have found a similar risk for divorce and poorer communication and problem-solving skills in couples who cohabited [source: Ambert].

DU researcher Scott Stanley posits that these cohabiting couples get married for the wrong reasons; rather than making a decision about commitment, couples who live together may find themselves "sliding" into marriage because it's easy to do so [source: DU]. After all, once you have a joint lease and a shared dog, who wants the hassle of a breakup? That may be why couples who move in together after getting engaged but before getting married are immune to the cohabiting curse -- they've already made a deliberate decision about their shared future.

According to DU, couples who live together to see if marriage is a good idea may be most prone to later disaster. It's possible that if you feel the need to "test" the relationship, you may already know in your heart of hearts that it's not meant to be. It's also likely that people who move in together have different values than those who don't; if you're very religious, you're less likely to cohabit, but you're also less likely to consider divorce an option when times get tough [source: CNN]. Cohabiters may be more apt to divorce, particularly if they've lived with several people in the past -- one study found that serial female cohabiters have divorce rates that are twice as high as women who cohabited once, with the man that became their husband [source: Wiley-Blackwell].

Whether it's your first or your 21st cohabitation, it's important to have a serious talk with your partner about moving in together. Make sure you're both on the same page as to what the step means for your relationship; after all, you probably don't want to slide into marriage with someone who only views living together as an easy way to skimp on rent.

Your Turn to Vacuum, Boyfriend

Studies frequently find that married people experience better health and more money than single people do, but those benefits don't extend to couples living together without wedding rings [source: Steinhauer]. Apparently, that marriage certificate is worth something -- married couples may even have more satisfying sex than cohabiting couples thanks to that feeling of legal commitment [source: Steinhauer]. But if you're a lady moving in with your special fella, there may be one advantage: A 2007 study indicates that live-in boyfriends do more housework than married men [source: Bryner]. Unfortunately, once a couple marries, the woman completes more household chores, as those good ol' traditional gender roles still hold sway.

How to Salvage a Bad Date
Relationship Counseling: Does It Work?
Love, Marriage and Relationships: A Teen Perspective