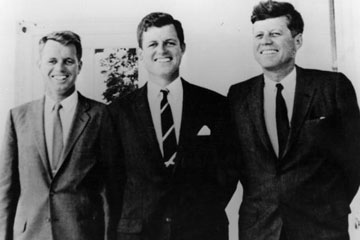 The public perception of the legendary Kennedy dynasty could be summed up with three words: Catholicism, politics and, of course, affairs. Over the years, the extramarital infidelities of America's royal family have continually piqued tabloid interest into the goings-on behind the Kennedy compound gates. As recently as February 2012, in fact, a former White House intern came forward with her story of an interlude with President John F. Kennedy, whose wandering eye was already widely acknowledged [source: Reuters]. And the Kennedy canoodling didn't stop at the threshold of the Oval Office.

The former president's married brother Robert F. Kennedy may have engaged in dalliances with screen siren Marilyn Monroe, and some allege that he and Jacqueline Kennedy carried on after her husband's assassination [source: McGreal]. In 1969, youngest brother Ted Kennedy also raised eyebrows when he abandoned the Chappaquiddick Island drowning site of Mary Jo Kopechne's -- a woman he left a party alone with while his wife, Joan Kennedy, was pregnant [source: TIME]. Bobby's daughter Kerry became embroiled in a public divorce from the future New York Gov. Andrew Cuomo when he discovered her long-term affair with a family friend in 2003 [source: CBS News].

Was there something in the water at Camelot? Clearly, that handful of Kennedys isn't the only cluster of Americans guilty of sexually straying from husbands and wives. Collective data on cheating behavior among married couples projects that between 20 and 40 percent of men and 20 and 35 percent of women have committed adultery against their respective spouses, which is actually a testament to the institution's monogamous bedrock, since 70 percent of dating couples report cheating [source: Tsapelas, Fisher and Aron]. Moreover, certain environmental factors may have predisposed Kennedy family members to extramarital activity. For instance, relationship psychology research has linked flusher bank accounts with higher likelihoods of cheating, since money literally affords more opportunity and access to sex [source: Tsapelas, Fisher and Aron].

But recent scientific findings also point to a more basic explanation for the Kennedys' common habit of cavorting away from the conjugal bed. Perhaps cheating is simply inherited, passed along the branches of the sprawling family tree through their blue-blooded Westchester genes.