How many skin cells do you shed every day? 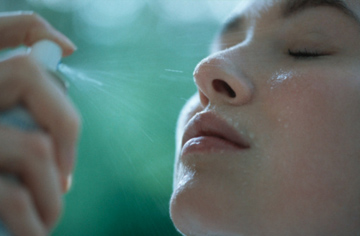 Your skin is quite the impressive organ, but how does it change over time? Learn more with getting beautiful skin pictures.
Nacivet/Getty Images

Human skin is an amazing organ -- protective, waterproof, and exceedingly useful. It's also constantly changing and regenerating itself. That said, what happens to dead skin cells? You might be a little grossed out to find out where they go and just how many you lose each day.

Your skin is composed of several layers. The layer you can see is called the epidermis. It's composed of cells made of keratin, a hard substance that also forms your hair and nails. In other species, keratin forms hooves, claws, horns, and even the shells of turtles and the spines of porcupines. The individual cells are called keratinocytes [source: National Geographic].

New keratinocytes grow at the lowest level of the epidermis, which bonds with the next layer, the dermis. The new skin cells gradually push their way to the top layer. When they reach the top, they die and are "weathered" by the environment and your daily activities. The top "dead" layer is called the stratum corneum. Eventually, the dead cells break away from the epidermis and fall off, making room for newer cells growing up from below. It takes roughly one month for new cells to get all the way to the top layer, meaning the skin you have a month from today will be completely new compared to the skin you have now.

If you're wondering exactly how many skin cells fall off, get ready for some staggering numbers. Scientists estimate that the human body is made up of around 10 trillion cells in total. Your skin makes up about 16 percent of your body weight, which means you have roughly 1.6 trillion skin cells [source: BBC]. Of course, this estimate can vary tremendously according to a person's size. The important thing is that you have a lot of skin cells. Of those billions of skin cells, between 30,000 and 40,000 of them fall off every hour. Over a 24-hour period, you lose almost a million skin cells [source: Boston Globe].

Where do they all go? The dust that collects on your tables, TV, windowsills and on those picture frames that are so hard to get clean is made mostly from dead human skin cells. In other words, your house is filled with former bits of yourself. In one year, you'll shed more than 8 pounds (3.6 kilograms) of dead skin. It gets even grosser: Your house is also filled with trillions of microscopic life forms called dust mites that eat your old dead skin.

If you can stomach learning lots more information about your skin, see the links on the next page.

Scientists Can't Stop Scratching the Itch
How does my skin affect my overall health?
What is skin made of?