How does alcohol make you drunk? 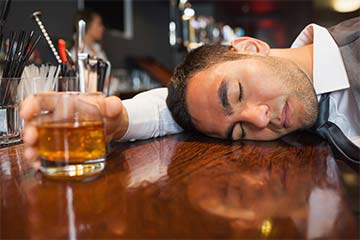 If one drink makes you feel good, why do five make you feel like throwing up or passing out?
Wavebreak Media/Thinkstock

Alcohol's not all bad. It can give you the chutzpah to finally chat it up with that guy from work when you see him at the bar, or make shaking your booty in public to Pink's "Raise Your Glass" seem like a really, really good idea.

But go from a pleasant buzz to a full-on roar and, a few "go home, you're drunk" memes quickly come to mind. If one drink makes you feel good, why do six make you crouch in the backseat of a cab eating fistfuls of french fries as you slur street numbers toward a driver who seems so very un-invested in vodka's effect on your fast food addiction?

Well, buck up, buttercup: The answer's in the alcohol. Or more precisely, in the ethanol, which has been part-and-parcel of alcohol for decades -- long before bootleggers and flappers gave it a good name. Here's how it makes you drunk.

When you drink alcohol, the water-soluble ethanol it contains has a free pass throughout your body. After it enters your digestive system, it takes a ride in your bloodstream, passes through cell membranes and strolls through the heart. It especially likes to hang out in the brain, where it becomes a central nervous system depressant. While in the brain, ethanol wanders around, causes feel-good dopamine to be released and links up with nerve receptors.

Of these receptors, ethanol particularly binds to glutamate, a neurotransmitter that normally excites neurons. Ethanol doesn't allow the glutamate to become active and this makes the brain slower to respond to stimuli. Ethanol also binds to gamma aminobutyric acid (GABA). Unlike its stinginess with glutamate, ethanol activates GABA receptors. These receptors make a person feel calm and sleepy so the brain's function slows even further [source: Inglis-Arkell]. Of course, the severity of one's drunkenness is dependent on other factors, too. Gender, age, weight -- even what you had for dinner -- can all play a role in how much alcohol it takes to become intoxicated [source: Beck].

Alcohol is eventually metabolized by enzymes in the liver at the rate of about 1 fluid ounce (29 milliliters) per hour, but this process can cause damage to the organ in the long term. Alcohol is also excreted by the kidneys as urine, or breathed out by the lungs. Whole ethanol molecules can even seep from the skin. Of course it can also make a violent exit while vomiting [sources: Brown University Heath Education, Inglis-Arkell].

A flood of alcohol -- about 1 liter (2 pints) of spirits or four bottles of wine -- can depress brain function so much that it fails to send crucial signals to the body, like those that control breathing and heart rate. People die from alcohol poisoning (or acute intoxication) because they pass out and the brain doesn't remind their bodies to breathe. Another reason? Their gag reflex is so suppressed that they aspirate, which means they inhale their own vomit and essentially drown in it [sources: Health Promotion Agency, Loyola Marymount University].

Can You Really Sweat Out a Hangover?
The Curse of Brewing Beer in Your Own Belly
What does alcohol proof mean?

Will you gain weight if you eat after 8 p.m.?
Could alcohol, caffeine, nicotine or street drugs be raising my blood pressure?
Thrush Mouth in Adults