Why do some people get flushed when they drink? 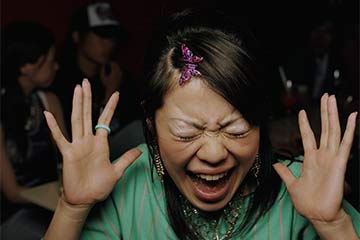 Genetics are to blame for why some people get flushed after drinking alcohol. It's more common in people of Asian and Jewish descent.
Ryan McVay/Digital Vision/Thinkstock

It's the moment you've been waiting for all week: 5 p.m. on Friday. You head straight from work to meet your friends at the local bar, thoughts of happy hour dancing in your head. Before long, you've bellied up to the bar and downed your first half-price beverage. But before you begin to feel that pleasant glow, a distinctly different reaction occurs. Heart-racing, head-pounding waves of dizziness and nausea overtake you, just as the skin north of your shirt collar turns beet red. This isn't at all what you had in mind, so why is it happening?

The good news: Someone didn't slip you a roofie. The bad news? You're experiencing alcohol flush reaction or alcohol intolerance, a condition in which your body struggles to break down ingested alcohol.

Normally, an enzyme known as aldehyde dehydrogenase 2 (ALDH2) breaks down acetaldehyde, a byproduct that occurs when your body metabolizes alcohol. If your ALDH2 enzyme is inactive, acetaldehyde -- a toxin -- accumulates and wreaks havoc on your body. One of the most common symptoms is flushed skin, particularly on the face and neck, but acetaldehyde can also cause headaches, dizziness, nausea, rapid heartbeat and swelling.

For some people, just one alcoholic drink can lead to a flushed face. For others, it can take several alcoholic drinks before the telltale redness occurs. While sensitivity varies by individual, there are groups of people who may be more prone to experiencing alcohol flushing than others. Genetics are to blame. The inactive -- or mutated -- ALDH2 enzyme can be passed from one or both parents to their offspring, and is particularly common in people of Jewish and Asian descent, especially those of Japanese, Chinese or Korean descent [source: Columbia Health]. Other risk factors for alcohol intolerance include allergies to certain foods like grains, taking certain antibiotics or antifungal medications, or having Hodgkin's lymphoma [source: Mayo Clinic].

A 2010 study published in BMC Evolutionary Biology traced the mutated gene to southern China some 10,000 years ago, and researchers speculated that it evolved as a way to prevent Yangtze River farmers from overindulging in the alcohol they made from fermented rice. Today, the mutated gene is credited with lower rates of alcoholism among the Asian population. The gene has also served as inspiration for the drug disulfiram (Antabuse), which is used to treat alcoholism by mimicking the unpleasant side effects of alcohol flush reaction [source: Hamilton].

This alcohol flush can be a red flag for cancer risk, too. People with the ALHD2 gene mutation have a markedly higher risk of developing esophageal cancer when they drink alcohol. For example, a person with an ALHD2 deficiency who drinks two beers a day is up to 10 times more likely to get esophageal cancer than someone without the defective gene who drinks the same amount [sources: Brooks, et al., Mapes].