Why does anxiety cause underarm sweat? 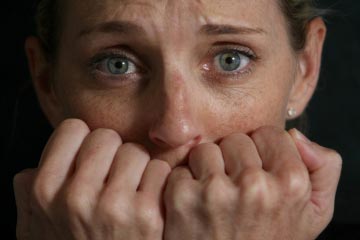 It's not just your face that gets sweaty. View more men's health pictures.
© iStockphoto.com/Don89

You're sitting at a large table in a conference room with several of your colleagues. Soon, your manager will call you to the front of the room to give a presentation. All you can think about is how nervous you are. Your heart pounds, you feel incredibly tense, and now there's that unmistakable wetness under your arms. Why does feeling anxious about something like public speaking make your underarms so sweaty?

Anxiety can evoke a body response called fight or flight -- your body's way of readying you to deal with a potential threat. While public speaking isn't really a threat, the lower part of your brain, which controls basic body functions, doesn't know that. Ultimately, you can blame the hypothalamus -- a part of the autonomic nervous system -- for your anxious sweating. When faced with a stressful situation, it tells your adrenal gland to release dozens of hormones, including epinephrine (adrenaline). Epinephrine is responsible for putting your sweat glands to work. The idea is that your body will need to remain cool -- and slippery -- during your supposed confrontation.

Not everyone has the same fight or flight responses. Some of us sweat mostly from our apocrine glands when we're anxious (such as those in the armpits and genital areas), while others sweat more from the eccrine glands (found on the rest of the body). Eccrine sweat is bad enough because it can mean sweaty palms. But in addition to potential pit stains, apocrine sweat can make you smell bad because it's full of protein and fatty acids. This makes it prime fuel for bacteria that live on the skin, which create body odor. Anxious sweating can be a vicious cycle -- worrying about whether others can see your sweat or smell body odor makes you feel even more anxious.

For most of us, the flight or flight response that occurs when we're anxious goes away fairly quickly. You calm down when you get warmed up and relax during your presentation, or, at the very least, you feel better once it's over. The more public speaking you do, the easier it becomes. You'll be less anxious, so you'll sweat less. You can also practice ahead of time to gain confidence, and try relaxation techniques before your next one.

Some people have an extreme reaction to anxiety, including excessive underarm sweating, that can last for hours. Stressful situations never get easier for them, and they may actually have a panic or social anxiety disorder. A stronger antiperspirant can help deal with the sweat, but that's just a symptom of the problem -- therapy and medication might be necessary.

Why Men Don't Like to Go to the Doctor
When do you need a clinical deodorant?
What medicines cause body odor?