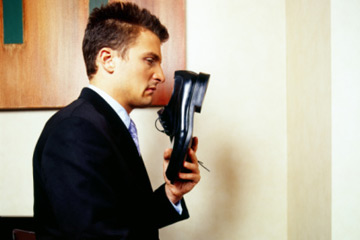 Smelly body odor (or B.O.) is always the proverbial elephant in the room. Nobody wants to talk about it, but nobody can ignore it. If your body odor changes, it could mean several things. Although it's an embarrassing subject, it's nonetheless important for paying attention to personal hygiene. Consider this everything you wanted to know about B.O. but were afraid to ask.

B.O. has to do with sweat. We have two kinds of sweat glands: Eccrine glands cover most of the body and secrete watery sweat, while apocrine glands show up in hairy areas such as the armpits and groin and secrete a thicker, fatty sweat.

Despite its bad reputation, sweating is good -- it helps cool your body when you're hot. And, believe it or not, sweat itself isn't smelly. It's the bacteria that naturally live on your skin that cause a smell by feeding on and breaking down the sweat you produce. Bacteria appreciate sweat from eccrine glands (especially when it builds up in socks and shoes), but the real feast comes from apocrine gland sweat, which is rich in fat and especially smelly when broken down.

Puberty, when hormones start to activate apocrine glands, causes a significant increase in body odor. It requires regular bathing to control. Many underarm deodorants work partly by killing bacteria that break down the sweat. Some say that underarm products like antiperspirants and deodorants with aluminum are unsafe, however, because studies have linked them with breast cancer and Alzheimer's disease [source: Thomas].

Various other factors could cause a change in body odor as well. A diet rich in spicy foods, onions or garlic, for instance, can cause such odors to travel through the bloodstream and enter sweat glands [source: Glaser]. Some studies suggest that men who eat more red meat emit more intense and less attractive body odor [source: Havlicek].

Like in puberty, other major hormone changes can affect body odor as well. Some say pregnancy and menopause, for instance, can cause a change in a woman's body odor. Transgender people who take hormone injections have noticed changes as well [source: Gorton].

Others cite medications and even mood as causes of odor changes. Debate remains open about the intricacies of the human body and what can affect odor. But overall, bathing regularly and avoiding smelly foods will safely control the stink.