Does sweating cleanse your system? 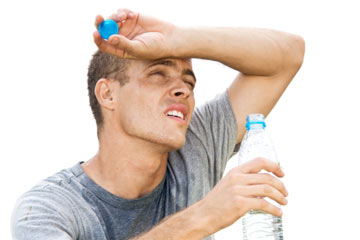 Be sure to stay hydrated as you sweat. See more men's health pictures.
© iStockphoto.com/oneclearvision

It's no secret by now that your body may be housing some undesirable byproducts. According to research reported by the Centers for Disease Control and Prevention (CDC) in 2005, the more than 2,000 people tested showed traces of about 60 different toxins -- including uranium and dioxins -- in their systems. The more we learn about these toxic invaders, the more the idea of being able to somehow "sweat them out" has gained momentum. Hence, the popularity of practices such as hot yoga and infrared sauna treatments. But don't be too quick to yank on a pair of yoga pants in the name of detox.

A quick look into how the sweating process actually works throws the whole notion of "cleansing sweat" into question. People are equipped with two different types of sweat glands. The predominant ones are eccrine glands. These are located all over your body, and their main function is to regulate your body temperature. You see, sweating is actually a response triggered by the brain, where the hypothalamus is located and acts as the body's thermostat of sorts. As your core temperature rises, your hypothalamus triggers the eccrine glands to produce moisture that emerges on the skin's surface.

Apocrine glands, on the other hand, exist only in certain areas -- such as your armpits and navel -- and they act in response to stress or stimulation. The secretions from apocrine glands may contain a few extra additives, such as proteins and fatty acids, but in general, all sweat contains the same primary ingredients: mostly water, some sodium and chloride, and to a lesser extent, potassium. Though you do lose electrolytes when you sweat, perspiration contains only trace amounts of any type of toxins.

If you really want to detoxify your system, you'd be better served by making sure your liver and kidneys are operating in tip-top shape, since it's these key organs -- not your sweat glands -- that are mainly responsible for filtering any toxins from your blood. For example, according to a Los Angeles Times interview with Donald Smith, professor of environmental toxicology at the University of California, Santa Cruz, sweating eliminates less than 1 percent of toxic metals like mercury -- your body gets rid of these substances primarily through urine or feces.

The bottom line is that, like breathing, sweating is a necessary function for all of us, but there are limits to the benefits that can come with it. Though you might see claims stating otherwise, going overboard with a heavy sweat in the name of detox might actually do you more harm than good, if you become dehydrated and get your kidneys out of whack along the way. So, if you do make it to that hot yoga class, just remember to keep a bottle of water handy.

For more on sweat and your body, follow the links on the next page.