What is a flop sweat? 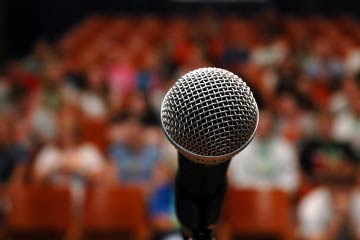 Are you ready for your big moment? See more men's health pictures.
iStockphoto.com/Sean_Warren

You auditioned for -- and landed -- the lead role in a musical. You've practiced, rehearsed, learned your lines as if you'd written them, and the staging now seems like second nature. It's opening night, and in a minute, you'll walk across the stage and deliver your first lines. But as you think about it, you realize just how many lines there are. Now, rivers of sweat are now pouring off your face, and your clothes are soaked. What's going on here? And what on Earth is your cue?

The term "flop sweat" has its origins in the theater and refers to the sudden, heavy perspiration experienced when confronted with anxiety and fear of embarrassment. Though identified with the stage, flop sweat is a very real phenomenon that we'll all experience at some point in our lives.

We sweat when it's hot outside, or when we exercise, in order to cool our bodies' rising temperatures. But we also sweat as a result of nerves, whether they're stimulated by fear, anxiety or excitement. (Lots of other things can make us sweat too -- like drugs, menopause, low blood sugar levels and even early-stage cancer.)

There's a middleman between your emotional state and your sweat glands -- the adrenal gland. When your nerves get worked up, your body figures there's something well worth getting worked up about (like a nearby mountain lion), so it orders up a dose of epinephrine (adrenaline) from the adrenal gland.

The epinephrine stimulates the sweat glands to produce more sweat (in anticipation of the overheating that normally results when running from said mountain lion). However, this doesn't help much when we're just strolling onto stage, removing our clothes and singing "Age of Aquarius."

How can you prevent flop sweat? It's as easy (or hard) as calming yourself in the lead-up to a stressful event. For some, deep-breathing exercises do the trick. For others, visualizing a positive outcome or even simply finding a distraction -- like preparing a grocery list for the upcoming week -- can soothe those sweaty nerves.

Why Men Don't Like to Go to the Doctor
How to Get Rid of Foot Odor
Do underarm sweat pads work?