Why do men sweat more than women? 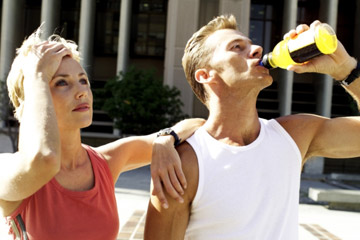 Because men sweat more than women, only the man needs electrolytes to replenish what he lost from exercising. View more men's health pictures.
George Doyle/Stockbyte/Thinkstock

You know the cliché "men are from Mars, women are from Venus," but a sweat gland is a sweat gland, whether it's from a male or a female body (we're not sure about the sweat glands of Martians). We all have two types: eccrine and apocrine sweat glands. Eccrine glands are found in our skin, all over our body, with the highest concentrations in the palms of our hands and the soles of our feet. Sweat from our eccrine glands is composed mostly of water, salt and potassium, and it usually cools us down.

The sweat you produce when you're emotionally stressed is from your apocrine glands. This is a thicker sweat that's made of fatty acids and proteins, and it's secreted from sweat glands located near dense concentrations of hair follicles (think underarm, groin and scalp areas).

On average, a human body has about 2.6 million sweat glands. The job of controlling our body's core temperature and sweat production falls to our sympathetic nervous system, the same system that handles our fight-or-flight response and other basic, automatic processes. We sweat when we're under physical or emotional stress. Take away physical exertion or emotional stress, and the sympathetic nervous system will turn up sweat production from our eccrine glands when the air temperature is 86 degrees F (30 degrees C) in an effort to regulate the body's temperature, which is naturally 98.6 degrees F (37 degrees C). This is called thermoregulation.

What researchers are trying to understand is why women don't produce as much sweat as men do, despite the female body having a greater number of sweat glands. You may think that would translate into women producing more sweat than men, but actually it's the opposite. While females may have more glands, male sweat glands produce more sweat [source: Buono].

A study conducted by the National Strength and Conditioning Association and published in the Journal of Strength & Conditioning Research evaluated the sweat rates of men versus women while they participated in an indoor spinning workout. What they found: Although both men and women drank the same amount of fluid, women's sweat rate was 0.57 liters per hour compared to the much higher 1.12 liters per hour sweat rate of men in the study [source: Hazelhurst]. Is it a difference in sex hormones? Body mass? Let's look at what researchers uncovered.

Recent studies suggest that when we're under heat stress from high temperatures or an intense workout -- regardless of what shape we're in or how much body fat we have -- women consistently sweat less than men but tend to have a higher skin temperature.

Researchers at the Polish Academy of Sciences in Warsaw, Poland, found that females sweat less than males but still are able to maintain a normal body temperature. This is because females are more efficient sweaters than males -- female bodies evaporate sweat on their skin more efficiently, which cools down the body without a lot of perspiration.

So while researchers are still uncovering the gender differences in how we sweat, many theorize that gender-related sweat differences lie in our differing body compositions. They look to not only how efficiently we use the sweat we produce, but also to our capacity for making sweat, hormonal fluctuations, sex hormone differences and how our bodies regulate water as possible reasons why men sweat more than women.

Do bacteria cause body odor?
What does a change in body odor mean?
What was the world's first underarm deodorant?