Why do I sweat when I eat? 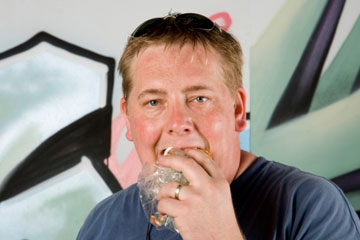 Long before air conditioning was invented, our bodies had their own built-in units. We sweat as a way to regulate body temperature. Too hot? Sweat helps the body turn down the heat by producing fluid to help us cool down while it evaporates from our skin. It's not just physical exertion or a hot summer day that can trigger sweating, though. Some people sweat when they eat, a condition called gustatory hyperhidrosis or gustatory sweating. Gustatory sweating is usually facial sweating, often around the lips and mouth, but it happens on the scalp and neck, too. Depending on what triggers this type of sweating, it may occur on both sides of the face or just one side. It's also involuntary.

Just like all of the involuntary things our bodies do -- breathe, blood pressure, heartbeat -- sweating is controlled by the autonomic nervous system, more specifically by the sympathetic nervous system. Bodies aren't perfect, though, and even a small glitch can cause problems.

There are a few different reasons why we sweat when we eat, although researchers haven't yet pinned down a tried-and-true cause. But they have found two types of triggers for gustatory sweating: physiologic and nonphysiologic. Physiologic reasons for sweating when we eat include hot temperatures, hot foods and spicy foods -- things that raise your body temperature enough to signal the sympathetic nervous system to turn down the heat. Nonphysiologic reasons for gustatory sweating include medical causes such as Parkinson's disease, nerve damage associated with diabetes, viruses that have neurologic complications including herpes zoster (also known as shingles) and nerve damage from surgery -- things that cause the nervous system to have a communication breakdown.

One of the most common reasons people have nervous system problems is diabetes -- uncontrolled blood sugar levels leave diabetics at an increased risk for nerve damage if their disease isn't kept under control. Frey's syndrome, a condition that can occur after surgery if nerve endings have been damaged near the parotid glands (glands in our face that produce saliva), is also a common cause of gustatory sweating. Whether due to injury or disease, if a sweat nerve is mistaken for a salivary nerve, when the brain signals it's time to salivate, we'll sweat instead.

What is in sweat?
Does diet affect body odor?
Understanding Apocrine Sweat Glands