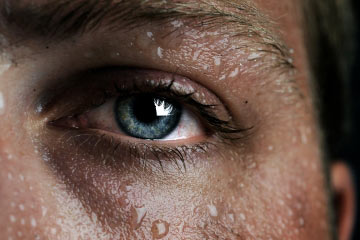 Sweating can cause your pores to open up. View more men's health pictures.
© iStockphoto.com/knape

Sweating is the body's built-in mechanism for keeping cool, but some experts believe that, because it opens up and unclogs the pores, perspiration is also a secret weapon for keeping our skin looking its best. However, if that's true, then why does sweat sometimes seem to aggravate conditions like acne and eczema? When you work up a sweat, is that healthy glow really healthy? The answer to this question isn't a simple "yes" or "no," and before you throw up your hands in frustration, we'll take a closer look at why that's the case.

First, let's break down exactly what's in perspiration. Sweat consists primarily of water, as well as concentrations of sodium and chloride, and to a lesser extent, potassium. There are two types of glands involved in sweating: eccrine and apocrine. Eccrine glands trigger perspiration to keep our core temperature regulated, while apocrine glands release sweat as a response to nerves or stimulation, such as exercise. In addition to the aforementioned ingredients, sweat from apocrine glands may contain proteins and fatty acids.

Despite its sodium content, sweat can't quite serve as a cheap alternative to a fancy, exfoliating salt scrub, but it does offer some other salon-quality benefits to your skin. For one thing, the process of perspiring itself causes your pores to open up as the sweat makes its way through layers of skin to the surface. Many aestheticians actually use steam during facials to achieve this same effect, so they can prep the skin for deep cleaning and extractions.

Sweat also may play a role in fending off foreign substances. Some recent studies -- including one conducted at Eberhard-Karls-University at Tubingen in Germany -- suggest that perspiration contains a natural antibiotic known as Dermcidin. Dermcidin can help kill bacteria, including E. coli and Staphylococcus aureus, on the skin's surface.

But here's the catch: Leaving sweat untended to for too long can end up doing more harm than good because it can lead to conditions like miliaria. More commonly known as prickly rash or heat rash, miliaria occurs when the eccrine glands become blocked, which results in a series of red bumps. Your best bet for keeping your pores clean and unclogged is to always wash your face and body as soon as possible after sweating. If your skin is easily irritated, you should probably change sweaty clothes and sheets right away, too.

So maybe the answer to whether sweat is your skin's friend or foe isn't a simple one, but at least now you know a trick to keep it on your side: Let perspiration take its natural course, but once it's made its way to the surface, make sure to follow up immediately with proper cleaning and care.

For more information on sweat and skin care, check out the links on the following page.