Why do I get sweaty palms? 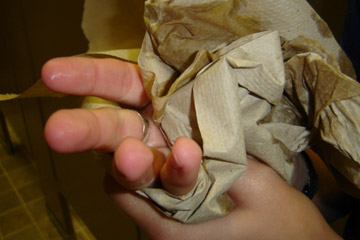 Does sweat uncontrollably drip from your hands, leaving you no choice but to head to the washroom? If so, you may have a condition called palmar hyperhidrosis. See more men's health pictures.
iStockphoto/Thinkstock

What does a 43-year-old single mom have in common with a teenager? As it turns out, no matter how old we are, we get nervous about first dates. Meetcha, an online dating site for the 40-and-older singles crowd, recently found that 57 percent of its members felt nervous -- including the appearance of dreaded sweaty palms -- when anticipating a first date [source: Spira]. Sweaty palms are normal. Except when they're not, but we'll get to that in a minute.

Everyone has sweat glands in their palms, so it's natural to have some moisture there. We have two types of sweat glands, apocrine and eccrine. Apocrine glands secrete a thick sweat packed with fatty acids and proteins. They're primarily located where we have a lot of hair follicles -- in our armpits, scalp and groin -- and it's this sweat that produces body odor when the normal bacterial flora living on our skin metabolizes it.

Eccrine glands, on the other hand, produce sweat that is mostly salt, electrolytes and water, and these glands are located all over the body, with the densest concentrations in our palms, the soles of our feet and our armpits. The body uses this sweat to cool itself down, and usually body odor isn't associated with this kind of sweating (which is why you don't see palm deodorants on the shelf at your local drugstore).

When you sweat excessively just on your palms, it's called palmar hyperhidrosis. Palmar hyperhidrosis affects about 1 percent of Americans, usually starting in childhood or adolescence [source: Cedars-Sinai]. Sufferers of the condition may find their sweaty palms interfere with everyday tasks such as writing or holding items, and may be embarrassed to shake hands or touch another person because sweat uncontrollably drips from their hands. While health care professionals can measure how much sweat is produced -- on our palms, for example, amounts of sweat greater than 20 milligrams/minute are recognized as a treatable medical condition -- it's generally a quality of life determination that ultimately brings patients to seek professional diagnosis [source: Stolman].

People often think that emotional stress (as opposed to physical stress or hot temperatures) causes excessively sweaty palms, but it's actually an overactive nervous system that's behind the problem. Specifically, the sympathetic nervous system is malfunctioning. That critical system controls basic, automatic bodily functions such as your heartbeat, pupil dilation, fight-or-flight response and even blushing. It also regulates your body temperature and the nerves that stimulate your sweat glands to produce sweat.

Treatments for palmar hyperhidrosis vary, but often begin with prescription-strength antiperspirants applied to the palms of the hands. Another option is botulinum injections (more commonly known as Botox), which block signals to the nerves in the surface of the hands. And electrical stimulation (known as iontophoresis) works by paralyzing the sweat glands, in turn decreasing the volume of sweat they produce. What works for one person may not for another, so doctors will determine which is best for you by looking at the severity of your condition and how well you tolerate the therapies.