by Natalie Kilgore
NEXT PAGE

Gold has been said to enhance the elasticity of your skin and slow down the aging process.
iStockphoto/Thinkstock

Cleopatra is rumored to have done it every night -- covered her face in a pure gold mask in hopes of maintaining her youthful appearance. It turns out she wasn't alone in thinking the precious metal contained anti-aging properties; for thousands of years, the metal has been used in Ayurvedic medicine, one of the oldest medical systems in the world.

The appeal of using gold for luxurious treatments is obvious. Throughout history, gold has been the most precious of all metals. It's been used to enhance everything from jewelry to sarcophaguses, and the ancient Egyptians believed it reflected the brilliance of the sun. Using that logic, it makes sense that the luminous metal would be added to the treatments of Cleopatra and other uber-wealthy and powerful people in need of a beauty touch-up. If nothing else, it serves as the ultimate status symbol. But it's also supposed to really work. Even after all these years, gold is still regarded as a beneficial element by many skin care professionals.

So how does it work? Umo Inc.'s Nano Mist is approximately seven times smaller than droplets of water produced by a regular steamer. This mist softens the outer layer of skin, preparing it to absorb moisture during the facial. Negative ions balance acidic body tissue fluid and eliminate free radicals in the skin. Gamma PGA -- a compound originally found in jellyfish -- has more elasticity than collagen. As Gamma PGA hydrates skin, it allows the gold to penetrate pores, leaving skin feeling soft and moisturized long after the facial is over.

Devotees describe this skin treatment as luminous and rejuvenating, but does it work? Many skin care experts (and their clients) believe it does. Gold facials are said to remove fine lines and wrinkles, and because the metal fights free radicals in the skin, it's anti-aging, too. Gold is also said to strengthen elastin, which can prevent the appearance of sagging skin later in life. When flakes are placed on skin's basal layer, cell growth quickly accelerates, making flesh feel tight and firm. Finally, gold can aid in decreasing inflammation, which, in turn, will slow melanin secretion and reduce age spots.

Of course, having your face covered in 24-karat gold is an exclusive service that comes with a hefty price tag. You don't have to be the queen of Egypt to afford it, but a single session lasts one to two hours and can set you back $380 to $770, depending on where you live. Umo Inc.'s gold facials are only available at top salons throughout the world, like Veronica Skin & Body Care Center in Malibu, Calif., London at Harrods, Moscow's Spa Palestra and the Raffles Dubai hotel. Even if you can't indulge and experience this extravagant treatment for yourself, never fear! You can always get a golden glow the old-fashioned way -- with an over-the-counter skin care regimen consisting of a cleanser, toner and moisturizer. 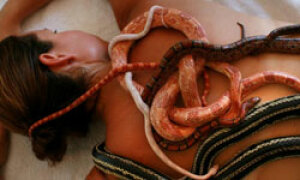