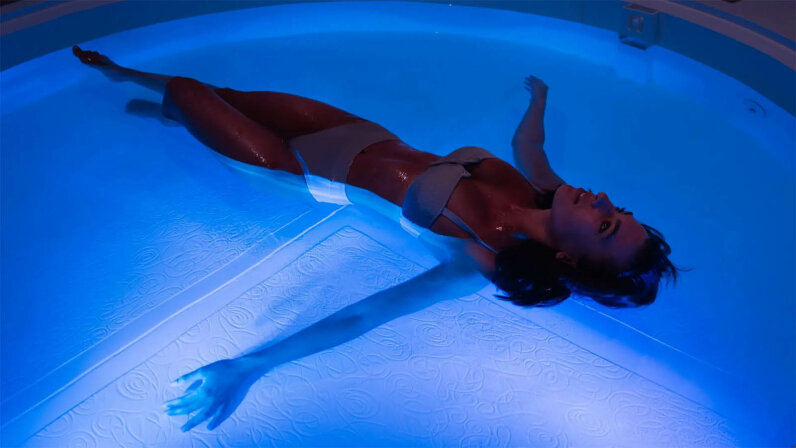 Floating in a sensory deprivation tank is a form of restricted environmental stimulation therapy, which is a useful stress-management tool. Laureate Institute for Brain Research

Los Angeles resident Megan Holiday was looking for a little peace and quiet. As an on-air personality at KROQ radio station and host of her own podcast, 7 Words, the busy, media-savvy DJ found a potential source of respite through some of her favorite entertainment outlets.

"I first began hearing about deprivation tanks on podcasts — Joe Rogan, Duncan Trussell Family Hour — and it was in hearing them talk about the experience that my level of interest began to peak," she writes via email. "They talked about how it was the ultimate meditation experience, a place to fully disconnect from outside stimulus and go inward. As someone who deals with anxiety on a daily basis, I use meditation as a way to cope and felt that the deprivation tank could also be a new resource for me."

Holiday isn't alone: Since the 1950s, people have been dabbling in a practice known as restricted environmental stimulation therapy (REST), a type of intervention rooted in sensory deprivation (i.e., cutting off your senses of sight, smell, hearing, etc.), often through the use of a special chamber known as a deprivation tank.

Studies have found that REST may be a useful stress-management tool, a successful treatment of addictive behaviors and a potential adjunct therapy for generalized anxiety disorder (GAD). Not to mention, even "The Simpsons" partook in the experience in the 1999 episode, "Make Room for Lisa."

If you, like me, are wildly claustrophobic and the idea of a "deprivation tank" (also known as a "sensory deprivation tank," "flotation tank" or "isolation tank") terrifies you to your core, then perhaps you've written off the therapy altogether. But there's a lot more to the nontraditional method than you may know.

The saltwater in float tanks is buoyant and heated to a temperature of about 95 degrees Fahrenheit (35 degrees Celsius) so your body floats effortlessly.
Just Float

There are a couple of different ways to experience sensory deprivation. "Chamber REST" involves lying on a bed in a dark, soundproof room. In contrast, the type of therapy Holiday has experienced is known as flotation rest, a variation of the treatment that involves floating in a saltwater solution in a tank that's cut off from external stimulation. While the modalities are slightly different, is there really a major distinction between "floating" and "sensory deprivation"?

"The terms are often used interchangeably, however I find that the latter term — sensory deprivation — is actually a misnomer, as we have found that most participants report an enhancement of internal sensations while floating (e.g., sensations of the breath or heartbeat)," Justin Feinstein, Ph.D., clinical neuropsychologist of the Laureate Institute for Brain Research, writes via email.

Feinstein is so invested in examining the potential benefits of floating, he actually opened the country's only float lab to date: The Float Clinic and Research Center at the Laureate Institute for Brain Research in Tulsa, Oklahoma. "Most float tanks have enclosures, which creates a claustrophobic environment," Feinstein says. "Our laboratory has developed an open float pool, where the room built around the pool is soundproof, lightproof and temperature/humidity-controlled. Thus, the float experience is exactly the same as in the enclosed pools, but without the need for an enclosure."

For float-curious people averse to tight spaces (raising my hand), this is potentially great news. But why would someone choose to float or participate in any form of REST in the first place?

For one thing, it appears it could have a major impact on the stress so many of us experience on a daily basis. "A one-hour float session was able to create a significant short-term reduction in anxiety in a group of clinically anxious patients, many of whom were resistant to other anxiety treatments," Feinstein says. "In addition, we found that the float experience left the anxious patients with a feeling of serenity that lasted for an entire day, suggesting the effects of the experience are sustained beyond the actual float session."

For Holiday, her first floating experience was so enticing, she went back for more. "I went to a place called Just Float located in Pasadena, California," Holiday says. "I found their facility to be really clean and beautiful and the pricing was very reasonable as well. I've done it about four times now and I absolutely loved the experience."

Editor's note: The Center's for Disease Control says there is no evidence that COVID-19 can be spread through the use of recreational waters. But during our reseac

But what is that experience? According to Feinstein, each participant has the chance to call their own shots. "The most important thing for people to recognize is that you are in complete control of the float experience, and you can get in and out of the pool whenever you would like, as well as have the lights on or off," Feinstein says.

While each facility is different, Just Float, which bills itself as the world's largest float therapy center, dissolves 1,300 pounds (589 kilograms) of Epsom salt into each float tank's 250 gallons (946 liters) of water to ensure "effortless" floating. The facility also heats the water to 95 degrees Fahrenheit (35 degrees Celsius) to create a neutral temperature.

For Holiday, the experience offered a serene setting for deep internal reflection; a form of ultra-meditation. "Each person essentially gets their own bathroom/pod where there is ample room to change and shower beforehand and after," Holiday says. "Then there is this awesome secret looking small door that opens up into a pod with a large almost Jacuzzi-looking tank that is softly lit. The water is warm but not hot, it is comfortable, and the salt in the water allows you to float comfortably. Once you are comfortable and ready, you close the door and push a button which turns off all the lights and it becomes pitch black. That's the time to close your eyes and go on the journey."

The "journey" may vary depending on who you talk to and the type of REST they partake in, but for Holiday, the lack of external stimuli helped her tune into the sensations occurring in her brain and body. "Many thoughts come in and out of my mind and I just try to let them pass and focus on breathing and being present," she says. "I usually float for an hour, but I know you can do more or less time depending on what you want to do."

Floating for an hour or so can "turn off" your brain and help relax other muscles throughout your body.
Laureate Institute for Brain Research

Should You Try It?

While research is still emerging on the benefits of REST, there aren't too many documented risks or drawbacks. Yes, accidental drowning is always a possibility when water is involved, but the risk is extremely low. As Medical News Today states simply: "The best way to prevent it is to avoid entering a tank when high or otherwise intoxicated."

Some people have reported experiencing hallucinations inside the tanks and others may find the darkness and silence uncomfortable, but the possibility for major risks remains low. "Thus far we have not seen any major safety issues in the anxious patients we have studied," Feinstein says

"I would highly recommend anyone doing a deprivation tank," Holiday says. "I always leave feeling relaxed and renewed. Setting aside an hour to go inward, focus on breath, escape from the cellphone, and check in with self has been a very beneficial experience for me. It helps me a lot with my anxiety or just those times in life where everything can seem overwhelming and I need to process or regulate my feelings."

Editor's note: The Center's for Disease Control says there is currently no evidence that COVID-19 can spread via activities like swimming and soaking in hot tubs. However during our research, we found that several float therapy centers had closed out of precaution due to coronavirus.

The first sensory deprivation tank was designed in 1954 by American physician and neuroscientist, John C. Lilly. He intended to use the tank as a way of studying the root of consciousness, but by the 1960s, he found himself in the midst of controversy when his experiments began including drugs like LSD and ketamine.

Why does coffee make your breath so bad?
Why Playing Musical Pillows Isn't Helping Your Neck Pain
Is USDA certified organic food safer than regular food?