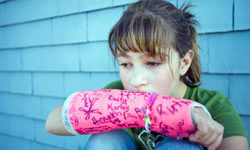 The arm is the second most common broken bone among children, just after the collarbone.
iStockphoto/Thinkstock

To loosely reference the lyrics of a Dean Martin tune, you're nobody 'til somebody, um, signs your arm cast. And many of us will either have one signed or sign the cast of another at some point in life, as the arm is one of the most commonly broken bones in the human body.

How common are fractured arms? Half of all adult bone breaks consist of fractured arms, and kids bust their wings pretty often as well -- it's the second most common bone-break among children, after the collarbone [source: Baniukiewicz]. Children are more likely to break their lower arms than their upper arms [source: AAOS].

You may break your upper arm (humerus) or either of the two bones in your lower arm (radius and ulna). An arm fracture can result from a fall, impact or other forms of sudden misfortune. The arm can be fractured in any number of terrible ways, meaning compound fractures (multiple breaks in the same bone) and spiral fractures (fractures caused by force of twisting) are distinct -- and distinctly painful -- possibilities.

If you fracture your arm, don't try to move it. Stabilize it using a sling or makeshift brace and seek medical attention. Depending on the severity of the break, it may take weeks or months for it to completely heal.

If you attempt to stop a fall with outstretched arms and it doesn't lead to an arm fracture, there's a chance another commonly broken bone won't fare as well, as we'll next learn. 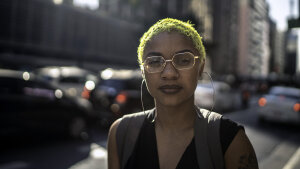