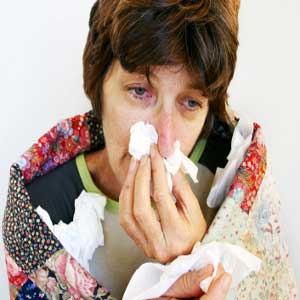 Your immune system is your body's defense system against invading agents, such as bacteria, viruses, and parasites. These agents are called antigens. White blood cells are our main defense against these antigens. Your body makes many different types of white blood cells that work 24 hours a day to keep you healthy.

One important type of white blood cell is a lymphocyte. These are made in the marrow of your bones. You may have as many as 2 trillion lymphocytes in your bloodstream at any one time. Two major types of lymphocytes involved in protecting the body against invaders are T lymphocyte cells and B lymphocyte cells. T lymphocyte cells destroy cells that have been infected or damaged by the antigens. B lymphocytes are found in immunity-related organs such as the lymph nodes. They direct the making of immunoglobulin E, called IgE. IgE is a special disease-fighting protein known as an antibody. It binds to an antigen in your body, such as bacteria, rendering it harmless.

Antibodies such as IgE are very specific. Much like a lock-and-key system, they only work on particular antigens. If, for instance, a flu virus enters your body, special flu antibodies attack it. Each time you're exposed to a new invading agent, or antigen, your body creates different antibodies to fight it.

When you have nasal allergies, your body sees harmless substances, including pollen, mold, or pet dander, as dangerous invaders. Your immune system immediately goes into action, releasing IgE. Each of these IgE antibodies is made especially for the particular type of allergen. For instance, the body produces one type of IgE antibody for ragweed pollen and another type for oak pollen.

The IgE antibodies attach tightly to the membrane of your body's mast cells and a kind of blood cell known as basophils. Thus the allergen, the IgE antibody, and the mast cell or basophil form a complex. The basophils circulate in the bloodstream and gather in the tissues of your nose, skin, stomach, and lungs. The mast cells remain stationary. The next time these complexes come in contact with the same allergen, the mast cells or basophils release powerful chemicals, called histamines, to fight the invader.

As the small blood vessels in your nose widen, fluids leak out into the surrounding tissues, causing the runny nose, watery eyes, itching, swelling, and other symptoms of nasal allergies.

This entire process is called the allergic inflammatory response. It's an effective way to fight invading agents. Unfortunately, when the agent is harmless, it's a wasted effort that only results in misery for you.

How to Help Prevent Allergies to Dogs
What does the pollen count mean for your allergies?
Is there any way to treat an allergy to horses?