What does epinephrine do for anaphylaxis?

When you come in contact with something you're allergic to, your immune system overreacts. It sends out an antibody called immunoglobulin E, and in turn, the antibody triggers a large number of chemicals in its war against the allergen. For most people, the response to the battle between their body and the allergen results in sneezing, itching, coughing, hives and some other unpleasant yet not dangerous symptoms. However, for some people, allergies can be life-threatening: These people may go into anaphylactic shock.

Signs that indicate the onset of anaphylaxis include a sudden and drastic drop in blood pressure, hives or rash, constricted airways that make breathing difficult, a rapid pulse, dizziness, nausea and even loss of consciousness. A person who's familiar with these signs knows that the first way to handle anaphylaxis is to give himself an epinephrine injection. The next step is to get immediate medical care. If you don't have epinephrine, call for emergency help right away; paramedics carry epinephrine with them.

Epinephrine autoinjectors are often referred to by their brand names, like an EpiPen. They're prescribed by doctors to people who have a history of anaphylaxis. You're supposed to jab the autoinjector into your outer thigh (not a vein, hand, foot or buttocks) so that the needle inside pokes out and injects you with the preset dose of adrenaline. Adrenaline is naturally found in your body and it's released when you're stressed. But the added dose of epinephrine assists your body to calm your anaphylaxis by forcing your blood vessels to constrict. This halts your dropping blood pressure and allows your airways to relax so that you can breathe better. It also causes the swelling in your skin to go down, and it stops the itching. 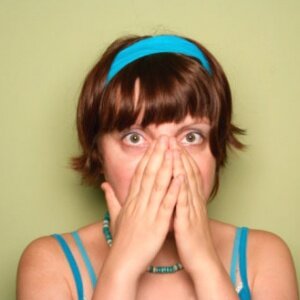