Are bagless vacuums better for people with allergies? 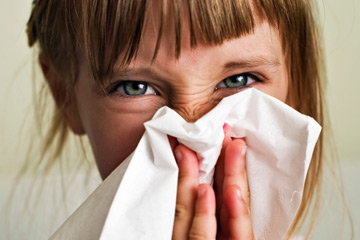 If you're allergic to dust mites, you'll need your tissues handy. But if you find a great vacuum, you may get some relief.
©iStockphoto.com/Imgorthand

Even the tidiest neatniks are susceptible to the sneezing, wheezing effects of tiny little home intruders known as dust mites. Dust mites are eight-legged interlopers that spend their lives blindly searching for one another, procreating, eating and creating waste. Among their favorite hangouts? Your rugs and carpets. And if you have long, shag-rug threads, then you have some especially happy dust mites.

Many people are allergic to dust mites, and if you're one of them, you'd be better off without any carpets or rugs to vacuum in the first place. (You'd also do yourself a favor by dehumidifying your home, and covering your mattress and pillows with impermeable, dust-proof covers that you wash once a week.) Most homes, however, have at least a portion of the floor covered in carpeting or rugs. No matter how often you clean, lots of things get trapped deep in the fibers of a carpet -- animal hair, dead skin cells, dust mites, dirt, even animal waste that's been tracked in from the outside on shoes.

Most people aren't really affected by the presence of dirt, dust mites or pollen. With others, however, these substances cause their immune systems to go wonky, releasing a unique immunoglobulin (called IgE) to deal with the perceived threat. Depending on the severity of the allergic reaction, otherwise harmless substances can cause symptoms that lead to annoyance, discomfort, missed work or school, or even hospitalization.

Vacuuming at least once each week can bring relief to those who suffer from allergic reactions to airborne or surface-covering allergens. But not all vacuums are created equally. So which is better: bagged or bagless? Read on to find out. 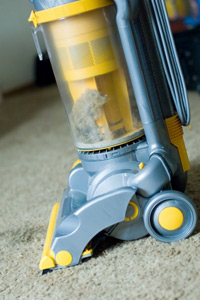 Because bagless vacuums collect dust and debris in a removable cup rather than a bag, you can see what's coming off your floor as you clean.
©iStockphoto.com/Tashka

James M. Spangler, a janitor working in a department store, invented the modern, portable, bagged vacuum in 1907. Soon after perfecting and patenting the idea, he started his own company that produced electric vacuums. (The patents were later purchased by an individual who renamed the company after himself: Hoover.)

Spangler's early prototypes used pillowcases to serve as vacuum bags, and today's bagged vacuum cleaners work much like these early models, but using cloth or paper bags. A fan inside the vacuum creates suction, pulling air in through the intake and pushing it out through an exhaust port. Often, a vacuum has a rotating brush on the bottom that helps dislodge dirt and dust as the vacuum passes over it. This dirt and dust is carried through the intake port, and through the cloth or paper bag, where it remains -- unless it's small enough to slip through holes in the bag. The air, which passes through the bag's holes, continues through the bag and out the exhaust port.

If the bag is full, the vacuum begins to lose suction power. When you change the bag, it normally has a flap that closes as soon as it's removed, preventing dust from escaping. You can then throw away the bag and replace it with a new one.

James Dyson was a man who strongly disliked bagged vacuum cleaners. He set his mind to creating a vacuum cleaner that required no bags and didn't lose suction power as it collected more and more dirt. He finally struck upon a system that worked.

As with a bagged vacuum, bagless vacuums draw in air through an intake valve. However, once your carpet's dirt and dust is inside the vacuum chamber, centrifugal force is used to separate particles from the airstream. These particles are flung outward against the chamber wall, falling into a collection cup as the air leaves the chamber and exits the vacuum through an exhaust port. Aside from the mechanics of the differing dust-collection methods, bagged and bagless vacuums are otherwise similar, and both features can be found on vacuums that span a range of styles and designs.

So why are bagless vacuums popular? Find out in the next section. 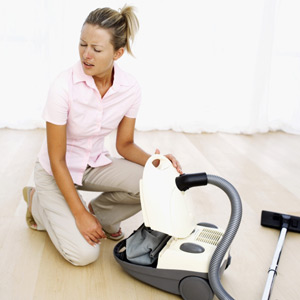 With bagless vacuums, you'll never again have a sneezing fit while changing the bag.
George Doyle/Stockbyte/Thinkstock

We all know that when bagged vacuums fill up with dust -- or crayon tips and pennies, if you have kids in the house -- there's a steady decline in suction power. Soon, there's no more effect on the carpet than if you'd just pushed four wheels back and forth across it. When you notice that you're only adding lines to the dirt and debris on your carpet, this is your signal to change the bag.

Bagless vacuums suffer much less decline in suction power as the dust collection cup becomes full. Even better, there's less chance of a bagless vacuum being full in the first place because its transparent plastic cover allows you to see exactly how much debris has collected inside the vacuum.

A bagged vacuum needs to have its bag changed frequently, depending on how often you vacuum and how worn your carpet is. Once that bag is changed, you have to retrieve another bag. This is where many vacuuming adventures are cut short. A visit to the closet -- followed by an extensive high-and-low search around the house -- too often reveals that vacuum bags weren't on your most recent household grocery list. Worse yet, you may waste a trip to the store if your particular type of vacuum bag isn't in stock. Once you throw away the old vacuum bag, suction is back to full power; however, without a new bag to insert into the vacuum cleaner, you can't do much cleaning.

Bagless vacuums, on the other hand, are always ready to work. Once you empty the dust cup, you just have to reattach it, and the vacuum's good to go -- no special-ordering vacuum bags or trying to remember where you stored them in the first place. Also, vacuum bags end up in landfills, while bagless vacuums won't contribute to this waste product.

While bagless vacuums have many advantages over bagged ones, there are some major disadvantages, as well -- especially if you have asthma or allergies. What are those disadvantages? See the next section to find out.

While convenient, bagless vacuums do have some drawbacks. They use a removable cup that collects dirt and dust through centrifugal force. Once it's full, you remove the cup, carry it to the trashcan and empty it. Doing so, however, means that a cloud of dust and dirt now floats around your trashcan. To avoid this, you have to empty it directly into a bag, and then tie off the bag to prevent leakage. Of course, dust and dirt will still escape as you make the transfer from cup to waste bag. By now, collecting dust and dirt directly into a disposable bag may not seem like such a bad idea.

People with allergies won't appreciate breathing in a cloud of allergens every time they empty the dust cup. The best way to avoid a sneezing fit is to empty the dust outside. You should stand upwind, cover your mouth and nose with a dust mask or other breathable barrier, and empty the cup onto the ground away from the house. Seems like a lot of trouble, compared to remembering to buy a package of vacuum bags now and then.

Regardless of whether you use bagged or bagless vacuums, the best way to protect yourself against household allergens is to purchase a quality, well-designed vacuum. Cheaper models may have loose seals or poor designs that result in either low suction power or uncontrolled dust dispersal within the vacuum itself, requiring cleaning. Vacuums with HEPA filters (High Efficiency Particulate Air filters) use tightly woven fibers -- usually fiberglass -- to trap almost all allergens, even tiny particles of 0.3 microns or larger that would normally pass through either a bagged or bagless vacuum. While these will need replacing occasionally, a HEPA filter -- especially when used in a quality, bagged vacuum -- will provide the best level of household relief for the allergy sufferer.

Keep reading for lots more information about vacuums and allergies.

How to Allergy-Proof Your Home
What type of vacuum cleaner works best for pet hair?
Can my vacuum help me fight mattress allergens?

Can Pollen Allergies Make You Tired?
How many people die each year from peanut allergies?
How Allergies Work