by Alia Hoyt Oct 17, 2019
Megastar Beyoncé posed with her parents Mathew and Tina Knowles at a 2005 benefit auction. Mathew Knowles disclosed in 2019 that he had been diagnosed with breast cancer. Frank Micelotta/Getty Images

Breast cancer is predominantly thought of as a women's disease, so many people were surprised when music executive and artist manager Mathew Knowles, revealed in October 2019 that he had undergone treatment for breast cancer. Knowles also is the father of megastar Beyoncé and her former manager.

"Even men have breast tissue. That's the reason they get breast cancer," says Dr. Nikita Shah, section leader for Breast Medical Oncology at Orlando Health UF Health Cancer Center. Understandably, the reaction to such a traditionally feminine diagnosis can be volatile for men. "Some men embrace and run with it. Some men look at it as, 'What's wrong with me?'" she adds.

"Men with these mutations could have about a 6 percent chance over their lifetimes of getting breast cancer. That means that most men — even if they have a mutation — still don't get it," says Leigha Senter, MS, LGC, licensed genetic counselor at The Ohio State University Comprehensive Cancer Center in an email. Still, she recommends that men with a strong family history of breast cancer, or those who've been diagnosed already, get genetic testing to determine whether a gene is at play.

"The lifetime risk of getting breast cancer is about 1 in 833 in U.S. men compared to 1 in 8 for U.S. women," says Susan Brown, M.S., R.N., senior director of education and patient support with Susan G. Komen in an email interview. This shows that breast cancer is mostly a women's disease. Male breast cancers account for only 1 percent of all cases diagnosed each year in the U.S., which equates to about 2,000 cases annually, Shah adds.

You might be wondering how men get breast cancer. Both men and women have breast tissue. But because men have low levels of the female hormone estrogen and high levels of the male hormone testosterone, they don't normally develop larger breasts as women do. Breast tissue has fat as well as glands that produce milk (lobules) and ducts that carry the milk to the nipples. Most of the time, breast cancer (for both men and women) begins in the milk ducts. This is called ductal carcinoma.

Breast cells normally grow and divide in response to estrogen and the more these cells divide, the more chances there are for mistakes to be made when copying their DNA. These DNA mistakes may eventually lead to cancer. If the male and female hormones are unbalanced, that could increase breast cancer risk. But the cause of most male breast cancer is unknown, according to the American Cancer Society.

There are a few things that put men at a slightly higher risk of developing breast cancer, according to Shah. For example, gynecomastia, which is the enlargement of male breast tissue, can be caused by liver disease, hormonal imbalance or certain medications. "That's one of the more common," Shah says. Other risk factors include aging, family history of breast cancer, obesity, liver disease, radiation exposure, heavy drinking, and certain testicular conditions. African-American men are at higher risk than white men. But as we said earlier, usually the reason for the breast cancer is often unknown.

While the risk of a breast cancer diagnosis for a man is lower than for a woman, it's often serious once it's caught. (The American Cancer Society estimates2,670 new cases of male breast cancer for 2019 and 500 deaths.) "Men don't have that much breast tissue and they're not looking for it, so it's a higher stage when it's diagnosed because men aren't going in for mammograms," Shah says. Knowles told "Good Morning America" that he consistently noticed drops of blood on his shirt and that prompted his doctor to order a mammogram, which detected the breast cancer.

These signs are practically identical to those experienced by women with breast cancer.

Breast cancer treatment depends on the specific type and stage, but in general, "men with breast cancer are not [treated] any differently than a post-menopausal woman with breast cancer," Shah says. Treatment could include chemotherapy, hormone therapy, radiation and/or surgery.

"The main difference in treatment for breast cancer in men is the surgery to remove the tumor is usually a mastectomy," Brown says, rather than a lumpectomy (a partial removal of the breast.) "Lumpectomy, often used in women, is rarely used in men because of the small size of the male breast."

After that, treatment is handled on a case-by-case basis, Brown notes, with some men requiring radiation therapy, depending on the stage. Typically, hormone therapy is also used since most male breast cancer cases are hormone-receptor positive. This therapy helps prevent the estrogen and progesterone hormones from attaching to the receptors (proteins in the cells), which stops the growth of cancerous cells. Chemotherapy is also dependent on stage and type.

Reversing the Stigma for Men With Breast Cancer

The diagnosis of breast cancer alone is enough to upset any patient. Add the perception of the disease as feminine, though, and a new layer of discomfort is common. "[Men] may be embarrassed if they have to get a diagnostic mammogram or see a breast surgeon or breast cancer oncologist where they are surrounded by pink and mistaken as a caregiver and not the patient," Brown says.

To that end, it's up to caregivers and the public to shift the dialogue to be more inclusive. "We can do a better job when talking about breast cancer, deliberately adding men to the story, acknowledging it can occur – normalizing the occurrence of breast cancer in men to remove the stigma," Brown of Susan G. Komen says. "And, as more men share their breast cancer diagnosis publicly, the stigma should decrease."

Brown also suggests support groups for men dealing with such a diagnosis. "Support groups for breast cancer may only have female members, so joining a support group for men with any type of cancer may be more helpful," she says. Susan G. Komen also offers free, six-week telephone support groups to provide a safe place for men to discuss the challenges of breast cancer. People interested in this resource can call the Komen Breast Care Helpline at 1-877 GO KOMEN (1-877-465-6636) or email helpline@komen.org. 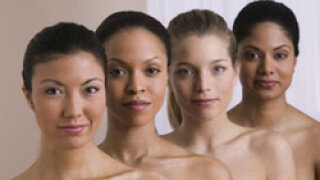 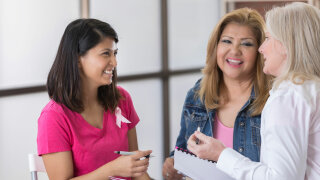 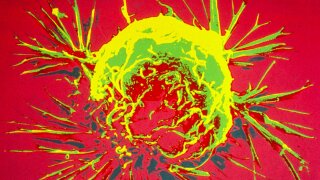