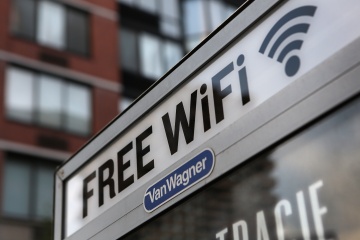 If you live in the city, WiFi is everywhere. Fortunately, you don’t have to worry about it giving you cancer.
John Moore/Getty Images

Chances are you're reading this article on a device connected to a wireless network (also known as WiFi). In fact, WiFi is now so ubiquitous, it's around us nearly everywhere we go — home, work, school, restaurants, retail shops, parks, libraries, medical offices and just about anywhere else you can think of.

Because we're surrounded by WiFi, we're also exposed to the radiofrequency (RF) radiation it emits. This has some people worried that we might be unknowingly increasing our cancer risks. This idea has been troublesome enough that numerous medical researchers, academic institutions and environmental organizations have studied the issue in-depth. Encouragingly, their work has revealed that our reliance on WiFi probably isn't putting us in too much danger.

There have been two types of studies examining RFs related to wireless networks (as well as radiofrequency radiation emitted from other devices, like cell phones and microwave ovens): those observing human cancer rates and those involving lab animals. The human observation studies have found no correlation between people at assumed high risk (such as those whose jobs involve working around RF radiation) and actual increased cancer rates. Lab studies also have found no link between RFs and cancer, although some of those studies have observed trace biological changes that could, hypothetically, be connected to cancer.

Because evidence hasn't been definitive, research is still being conducted. However, many respected public health and environmental organizations — like the U.S. Environmental Protection Agency, National Toxicology Program, Public Health England and the Norwegian Institute of Public Health — believe that RF exposure from WiFi is an unlikely danger.

The probable reason that WiFi-generated RFs aren't hazardous is because they're a type of low-frequency, non-ionizing radiation. This means the radiation isn't strong enough to charge molecules and therefore isn't likely to do damage to our bodies on a cellular level. And as RFs go, those produced by WiFi are particularly minor. At about 0.1 watt, the signals seem to be even lower than what are emitted from our cell phones.

It's the higher-frequency radiation, such as what's produced from X-rays, gamma rays and ultraviolet light that ionizes and causes measurable harm to human and animal health. However, if you remain concerned about potential cancer risks from all RFs, there are steps you can take to reduce your exposure, such as turning off your wireless network at home when you're not using it, setting your tablet or smartphone to "airplane mode" when you're not using them for Internet browsing and using the speaker function or a headset when talking on your cellphone.