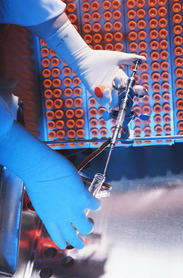 Modern Medicine Image Gallery Over the next several years, cancer vaccines have the potential to completely change the treatment of cancer.

How long do you expect to live? That's probably not a question you care to think about every day, but you can probably expect to live considerably longer than the generations that preceded you. A baby born in the United States today can expect to live to over 77 years of age, according to the CIA's World Fact Book. One hundred years ago, it was unusual for someone to live that long. The life expectancy of all American babies born in 1900 was just 49 years. Today, more than 27 percent of the American population is over 50.

The point of these statistics is to illustrate how the health of the world, not just of the United States, is improving at a remarkable rate. Today, there is a larger percentage of senior adults than the world has ever seen. So, what's allowing us all to live longer than ever before? The most obvious reason is the amazing amount of medical technology developed in the 20th century. Scientists have developed medicine and equipment that enable us to fight off disease more effectively. Penicillin (1928), measles vaccine (1953), polio vaccine (1954) and insulin (1920s) are just a few of the many medical discoveries made in the last century.

Among the most notable achievements in that time was the eradication of polio and smallpox through vaccines. Today, scientists continue their search for vaccines to prevent other diseases. Possibly the most exciting achievement of this century will be the discovery of a universal cancer vaccine. Scientists are on the verge of developing such a vaccine that will save millions of lives annually when it's discovered. In this article, we will take a look at current cancer treatments and types of cancer treatments in development.

Cancer is a nearly invincible disease that has plagued humankind for centuries. Only in recent decades have doctors found effective ways to treat it. In that time we have also found better methods for early detection of this devastating disease. Despite great efforts to develop better treatments, more than 6 million people worldwide died from cancer in 1997. And we are still years away from any possible cure for cancer, something that many scientists think is impossible. While early detection is your best form of prevention, there are several techniques that are used to treat cancer. As you can read in our article on How Cancer Works, these techniques include:

Surgery is the oldest and most widely used treatment available for cancer patients. About 60 percent of people diagnosed with cancer will undergo surgery, according to the American Cancer Society. If a growth is found early, doctors may opt to remove it before it has a chance to grow. Surgery is also used when there is a good chance to remove an entire tumor before it spreads. Surgery is rarely used as a stand-alone treatment. Usually, it is combined with radiation therapy and /or chemotherapy.

In radiation therapy, the specific part of the body containing a cancerous growth is exposed to radiation energy to attack reproducing cancer cells. However, the radiation cannot affect the cancer cells without affecting normal cells, which can lead to several unpleasant side effects, including fatigue, dryness and peeling of skin, nausea and vomiting. Radiation therapy is often used to shrink a tumor so that it can be removed through surgery, or to prevent tumor growth following surgery.

Chemotherapy, the treatment of cancer through drugs, is an effective treatment method for fighting cancerous cells that have spread to other parts of the body and that cannot be treated with any other method. There are dozens of cancer drugs that, in some cases, can cure the cancer, limit the spread of cancer and alleviate the symptoms of cancer. Similar to radiation therapy, chemotherapy also can affect normal cells, causing the same kinds of side effects.

Two more recent treatments for cancer are hormone therapy and immunotherapy. Hormone therapy involves anything that deals with manipulating the body's hormones to treat the cancer, including administering hormones and drugs. Doctors may also remove hormone glands to kill cancer cells or prevent further cancerous growth. Immunotherapy also manipulates the body's normal functions. During immunotherapy, patients are given medication to stimulate the body's immune system to fight cancerous cells.

Can you imagine how long the average life expectancy would be if cancer were ever eradicated the way polio and smallpox have been? It's amazing to think about what doctors might be able to achieve in our lifetime. Scientists have made significant inroads in the last few decades and are now testing several vaccines that could possibly lead to the complete prevention of cancer. To learn more about cancer, please read How Cancer Works.

Probably the most promising form of cancer treatment is in immunotherapy, where scientists are developing several experimental cancer vaccines that could lead to the eradication of cancer this century. There are two major categories that cancer vaccines fit into:

In these two categories, there are more specific types of cancer vaccines. Each type of cancer vaccine works on the same basic idea: The vaccine, which contains tumor cells or antigens, stimulates the patient's immune system, which produces special cells that kill cancer cells and prevent relapses of the cancer. Unlike vaccines for other disease that prevent the occurrence of the disease, there isn't a vaccine in development that can prevent the onset of cancer. Cancer vaccines are used only as a treatment after the cancer has been found in a patient. Here is a list of five kinds of cancer vaccines being developed:

With recent DNA (deoxyribonucleic acid) research, scientists are finding ways to use the genetic code of proteins produced in cells to aid the immune systems fight against cancer. Bits of DNA from the patient's cells are injected into the patient, which instructs the other cells to continuously produce certain antigens. This DNA vaccine increases production of antigens, which forces the immune system to respond by producing more T cells.

Tumor cell vaccines can be produced using cancer cells from the patient or another patient. These cells are killed and injected into the patient. While the cells are dead, the antigens are still recognized by the the immune system, which responds by attacking the dead cells. The immune system will also attack the live cancer cells carrying the antigen that was displayed on the dead cells.

While scientists have had some success with each of these cancer vaccines, it is still much too early to predict when a true cancer vaccine will be developed. However, science has brought us closer than ever to being able to develop a method that could eradicate some forms of cancer in our lifetime, if not all cancer entirely.

How Vaccines Work
Fighting One Person's Cancer With Another's Immune Cells
What are the most promising new weapons in the war on cancer?

Can I get cancer from WiFi?
Research Identifies New Genetic Clues for Testicular Cancer Risk
What are the most promising new weapons in the war on cancer?