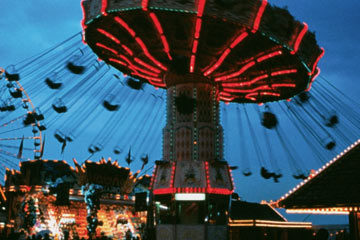 Amusement parks are fun, but along with all the candy apples and funnel cakes, there's a 1 in 257,826 chance you could be injured while you're there.
Medioimages/Photodisc/Thinkstock

Unlike in the cartoon universe, anvils don't fall from overhead in the real world. We don't expect them. Or bricks, or bullets, or anything but rain and snow. We don't know anyone who has been injured by an anvil falling on them. We have no prior history with the Acme product line. So most of us would likely consider being struck on the head by an anvil a freak accident. An act of God. Bad luck.

Freak accidents and acts of God are generally considered to be unlikely events that we could not have predicted, controlled or prevented. For example, what are your odds of being struck by a falling bullet that was fired straight up into the air? Let's break it down.

What goes up must come down, right? What goes up: A bullet fired from a Kalashnikov rifle leaves the muzzle traveling faster than 1,500 miles (2414 kilometers) per hour. What comes down: If that bullet is shot straight into the air it would be traveling at about 150 miles per hour (241.4 kilometers per hour) as it falls to the ground -- you can thank air resistance for slowing it down -- and would hit the ground, or your head, with the same amount of energy as if you were struck by a brick (or an anvil) falling from about 4 feet (1.2 meters) above you [source: Matthews]. Bullets falling at 68 mph (109.4 kilometers per hour) easily penetrate the skin, and those that are traveling at least 136 mph (218.9 kilometers per hour) may penetrate bones, as well as cause internal injuries or death [source: Maugh]. The likelihood you'll suffer an accidental injury from a firearm discharge in your lifetime? Just shy of 1 out of 6,000 [source: National Center for Health Statistics].

Dodging bullets shouldn't be your only concern, though. Circumstances such as being struck by lightning (your odds are about 1 in 10,000 in a lifetime), being struck by a meteorite (those lifetime odds are about 1 in 700,000) and being injured by a vending machine (you may be surprised, but vending machines get about two or three of us every year) are also examples of freak accidents, as are events such as Hurricane Katrina and other natural disasters [sources: NOAA, Plait]. Do you know your odds of being injured or killed at an amusement park? We do, and we'll roll out the numbers next, along with how the pros calculate those odds.

Talking about the chances of a freak accident occurring involves probability, odds and something called risk assessment.

The National Safety Council, a non-profit organization aiming to reduce the number of accidental yet preventable injuries and deaths in our communities, also uses these calculations to figure out the likelihood of various events and circumstances causing injury or death to the American public. They, among other groups, assess the odds of death per cause or event for two spans of time -- the odds of it happening in a single year and the odds in a lifetime. Let's learn about how they do this as we calculate the odds of being injured at an amusement park.

What are the odds ... of winning Powerball?

Because it's what everyone wants to know: What are the odds of winning Powerball's jackpot, the grand prize? You have about a 1 in 175 million chance of winning the jackpot [source: Multi-State Lottery Association].

To calculate the risk of a freak accident happening during a single year, you need two numbers: the population in that year and the number of deaths resulting from that type of circumstance during that year. For example: What is the risk of being injured in an amusement park accident?

First we need to know that in 2009 about 280 million Americans visited amusement parks -- this is the park population. Then we need to know that there were 1,086 reported park accidents that year. Divide the number of park guests by the number of reported injuries and you find that American amusement park visitors have about a 1 in 257,826 chance of being injured in a single year.

Whether or not a freak accident happens to you isn't as black and white as these calculations alone. Look at it this way: Sure, the odds of being in a fatal car accident are greater than being attacked by a shark, but also keep in mind that more Americans ride in cars than swim or surf in shark-dwelling waters. If you live in Wichita, Kan., for example, you're about 1,400 miles (2253 kilometers) away from Venice Beach, Cal. and about 1,400 miles (2253 kilometers) from Venice, Fla. If you travel less than 1,200 miles (1931.2 kilometers) from home during your vacations -- most Americans vacation between about 100 and 1,200 miles (160.9 and 1931.2 kilometers) from home -- your risk of a shark attack, or even ever seeing the ocean for that matter, is going to be lower than a person who surfs in the Red Triangle, a spot off the coast of California that's notorious for sharks and shark injuries. In this instance, your location helps to mitigate your risk.

While you may not be able to foresee all ways to prevent injury or death resulting from an act of nature (or perhaps your neighbor's trampoline), you are in control of lowering your risk of premature death from such things as chronic disease, including heart disease, diabetes and cancer. Quit smoking, exercise at least 30 minutes every day and eat a healthy diet -- and to be safe, never rock or tilt a vending machine to get that stuck candy bar.

Your Chance of Unintentional Death Is ...

The chance of dying from any unintentional cause in your lifetime are about 1 in 31 [source: National Safety Council].

Is American wheat the cause of gluten sensitivity?
Getting a Grip on Lyme Disease
The Year in Poop