Can body parts be reattached after accidental amputation? 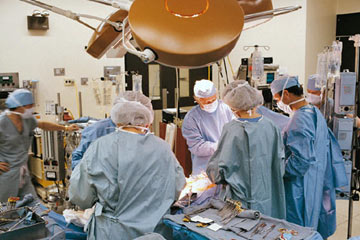 Since the first limb-reattachment surgery in 1962, techniques have improved, as have the prospects for those who accidentally amputate limbs.
Digital Vision/Thinkstock

When Everett Knowles Jr., a 12-year-old boy in Somerville, Mass., had his right arm ripped off at the shoulder as he erred while attempting to "hop a train," there was no good reason for anyone to think he could be made whole again.

Prior to this 1962 incident, doctors at Massachusetts General Hospital believed they were capable of such a task, but no suitable opportunities had been presented to them. Most accidental amputations are messy affairs, resulting in crushed limbs or other serious injuries that had made such a complicated procedure as reattachment impossible.

Before May 23, 1962, partial limb reattachments had been performed, but never a full reattachment of a completely severed limb -- on a human, anyway. Surgeries had actually been performed on several candidates previously, but all of them were dogs, who had successfully reattached limbs. Often enough, people suffered injuries that severed an artery, a bone, muscle tissue or nerves, and doctors had learned how to repair and reattach those. They just hadn't performed all of the procedures to heal a single injury that resulted in a full amputation and full reattachment.

In Knowles' case, doctors decided he would be a good candidate for a full reattachment. Within four hours of losing the arm (it was on ice), surgeons and specialists were working feverishly to help return the boy's body and prospects in life back to something resembling normal.

Doctors reconnected the arteries and veins first, and welcomed the return of a pink hue to the hand. The bone, muscle, nerve bundles and skin were then attached in subsequent surgeries. After additional nerve reattachment was performed several months later, feeling returned to the boy's arm and hand in the following weeks. This wasn't altogether pleasant for Knowles, as it created a strong, painful and tingling sensation.

What was pleasant is that the world's first limb reattachment surgery was a success. In the years that followed, Knowles regained use of his once-dominant right hand, and was eventually able to use it as well as a natural southpaw uses a right hand.

Since then, limb-reattachment surgery has improved, as have the prospects for those who accidentally amputate limbs. But what should you do to maximize the odds of reattachment success if you find yourself carrying your own detached limb with you to the hospital? Keep reading to find out.

Microsurgery -- the fine art of reconnecting blood vessels, nerves and tissue -- made strides in the 1970s, but wasn't common until the 1980s. In that time, the odds of success for limb reattachment surgery have increased.

But if you or (ideally) someone else in your presence loses a limb, what should be done? Start by calling 911. The injured party is going to need immediate medical attention, and lots of it. But as far as reattachment goes, the sooner specialists can be notified to prepare for such an emergency procedure, the better the odds the procedure will be successful.

Next, stop the bleeding by using pressure with your hands, a re-purposed piece of clothing or a tourniquet above the wound. Once the patient is stabilized, secure the severed limb or finger. Gather up all the "parts" to give the surgeons the most possible tissue to work with. Put the limb inside a plastic bag, without ice or water inside the bag. This is very important, as direct contact with ice can result in frostbite, and water contact makes limb reattachment more difficult [source: BBC]. Seal the bag and place it in a larger bag or bucket containing ice if possible.

Hopefully while this is happening, the surgical team members are clearing their schedules, because limb-reattachment surgery can take an entire day. When they see the wound and the severed limb, they'll be hoping to see a clean cut, making the task ahead of them that much easier.

If you lose a limb, what can you do to increase the odds that will be successfully reattached? We'll discuss the role the patient plays, as well as how the surgery is performed, next.

Once the injured patient arrives at the hospital, it's time for the surgical team to work its magic -- and there's a complex series of steps they take in surgery to ensure the severed limb can survive once it's reattached. First they'll reattach the bone, using pins or wire to hold it together. Then specialists will restart blood flow by suturing the arteries and blood vessels. Next, surgeons begin the laborious process of reconnecting tendons, muscle tissue and nerves, although nerve reattachment can be saved for a later date. Finally, using grafts from other parts of the patient's body if necessary, the skin is stitched back together.

Limbs can be reattached as many as four days after amputation if refrigerated, but ideally surgery occurs within a day [source: Engber]. A lopped-off finger will still have a place on your hand for about 12 hours after amputation if not refrigerated, but a full limb like an arm or leg -- left at room temperature -- must be reattached within six to 12 hours, due to rapid death of muscle tissue.

After healing from both the original injury and the reattachment surgery, a person whose limb has been reattached faces a lengthy period of rehabilitation. Some patients find it emotionally and visually jarring when they see their reattached limb, since it may look, feel and function differently. Further surgeries may be required to repair nerves, tendons or joints.

Better than going through all of that, keep your limbs inside the rollercoaster car at all times, and see the next page for lots more information about limb reattachment.

Surgeons can do a lot more than just reattach a severed body part back in its original place. Cross-transfer, or transplantation, is a surgical procedure in which, for example, surgeons amputate a healthy hand from a damaged arm and reattach it to a healthy arm with a damaged hand. While the palm of the hand would face the proper direction, the thumb would be where the pinkie was, and vice-versa. Also, if a patient had to lose most of his femur (thigh bone) -- including the knee -- but his lower tibia and fibula bones were undamaged, surgeons could reattach those bones facing backward to what remained of his femur. The procedure would allow him to use his ankle as a knee joint and his foot, with toes facing backward, as a support for a prosthetic lower leg [source: Smith].