Are Meat Sweats a Real Thing?

Browse the article Are Meat Sweats a Real Thing? 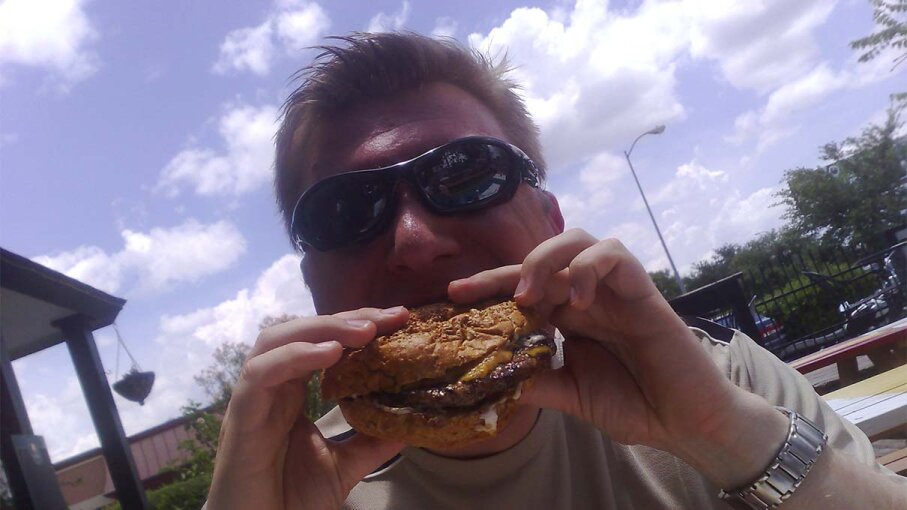 A big juicy burger will make you sweat more than a loaded potato, because protein is more difficult to break down than carbohydrates or fat and has a higher thermic effect on digestion. Flickr/(CC By-ND 2.0)

If you were a fan of the sitcom "Friends," you probably remember the 2001 Thanksgiving episode, in which Joey (Matt LeBlanc) consumes an entire turkey, and then sits back and mops his apparently feverish brow. "Here come the meat sweats," he groans. More recently, there was the Progressive Insurance commercial in which "I've got the meat sweats" served as the punchline. And Arby's, which emphasizes the carnivore appeal of its menu, even gave away beef-themed pants and hoodies — "meat sweats" — as a promotion. The Merriam-Webster dictionary even has contemplated including the phrase.

People who've consumed massive quantities of animal protein report that on occasion, they've experienced the meat sweats, a sensation of feeling flushed and fatigued, accompanied by profuse perspiration. In the Ryan Nerz's 2006 narrative "Eat This Book: A Year of Gorging and Glory on the Competitive Eating Circuit," described a competitor who suddenly was afflicted with the condition, and how his face turned pink and his eyes widened, as "beads of sweat dotting his forehead are turning into drips." The man's distress reportedly was disconcerting to witness.

Though there isn't an extensive body of scientific literature on the meat sweats, it does seem to be a real phenomenon. Chris Lockwood, Ph.D, a Draper, Utah-based consultant in the food, fitness and dietary supplement industries who holds a doctorate in exercise physiology from the University of Oklahoma, explains in an email that the thermic effect of feeding, or TEF, actually is a good thing, rather than a sign of distress. "It means that your body is burning more calories and fat than it typically does when processing a meal," he explains.

While you can get a thermic effect from eating other foods besides meat, a huge steak will make you sweat more than a loaded potato, because protein is more difficult to break down than carbohydrates or fat, and has a higher thermic effect when your body has to digest and use it. New York City-based registered dietitian, Natalie Rizzo, M.S., R.D. explains in an email that as a result, "Some will experience an increase in core temperature and start to sweat."

But the thermic effect of protein only explains part of the total TEF, according to Lockwood. That big juicy slab of beef also stimulates the release of hormones that affect your thyroid and are involved in regulating your metabolism.

But why would a meat-eater sweat more than someone who eats a plate of tofu with the same amount of protein? One plausible explanation, according to Lockwood, is that the simple act of chewing also affects the metabolism. Lockwood says that researchers demonstrated this by having some experimental subjects eat a solid meal, while others consumed the same amount of calories and identical nutrients as a liquid puree. For those who had to chew, the TEF more than doubled, he says.

If you eat enough big steaks, over time your body will train itself not to sweat as much. "The noticeable rise in TEF is your thyroid-mediated attempt at maintaining your body's total available and stored energy supply with what it had previously programmed as your total need," Lockwood says. "Continue this process of over-feeding calories in considerable excess of need, and that noticeable TEF burn will become less noticeable as will the sight of your toes as you stand upon a weight scale."

If you're out with the guys at a barbeque joint, getting the meat sweats may just be minor annoyance. But for those in a social situation — "say, for example, if they're on a date and don't want to come across as the gross, sweaty creep," as Lockwood puts it — the meat sweats are fairly easy to avoid, by just eating less.

"So long as the total calories consumed within the meal is relatively similar to the guy's usual meal size, then he just needs to keep the total protein to not more than 20 percent of the total calories present within that meal," Lockwood says. "To put that into perspective, an eight-ounce top sirloin contains about 68 grams (2.4 ounces) of protein, 18 grams (0.63 ounces) of fat, and 456 kilocalories. You'd only want to eat about half of that unless you typically consume at least 1,360 kcals per meal."

Now That's Interesting
According to Lockwood, "Some studies suggest that meats high in smaller and medium chain fats will elicit a higher TEF than protein-rich foods with a higher amount of the fat coming from long-chain saturated fats. Thus, a meal that uses tropical oils such as coconut and palm fats, which are popular during ketogenic dieting, may be of benefit if you're trying to increase your TEF response to the meals you consume."