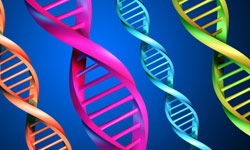 Most rare diseases are genetic and are found in a person's DNA.
©iStockphoto.com/Kyu Oh

Everyone has heard of cancer or HIV, but what about Alpha-1 Antitrypsin Deficiency? Or even Dercum’s disease?

Aside from the more common ailments that may affect us or our loved ones, and garner the attention of the press or charities, there are a lot of other ways out there to get sick and die. Maybe it's a virus, or it could be a genetic disorder. In any event, they all have one thing in common: they're no fun.

We'll look at the top 10 rare diseases, some of which you may never have heard of -- and others which you hope you never will again.

Disease descriptions courtesy of the National Organization for Rare Disorders (NORD). To browse their extensive Rare Disease Database - including contact information for related organizations - visit their website at www.rarediseases.org.

Progressive multifocal leukoencephalopathy (PML) is a neurological disorder characterized by destruction of the myelin, an oily substance that helps protect nerve cells in the brain and spinal cord, also known as central nervous system (CNS) white matter. It is caused by a virus called JC virus (JCV), named after the initials of the patient in whom it was first discovered. The virus is widespread, found in at least 85% of the general adult population. It remains inactive in healthy individuals and causes disease only when the immune system has been severely weakened, such as in people with HIV/AIDS, or hematological malignancies, and in organ transplant recipients who receive immuno- suppressant medications to avoid rejection of the transplanted organ. Altogether, PML occurs in approximately one in 200,000 people.

The term "progressive" in PML means that the disease continues to get worse and often leads to serious brain damage. The term "multifocal" means that JCV causes disease in multiple parts of the brain. However, it is possible for an individual with PML to have only one brain lesion instead of several lesions. The term "leukoencephalopathy" means that the disease affects mainly the white matter of the brain or myelin, although there are some rare cases in which the gray matter neurons is also involved.

Paraneoplastic neurologic syndromes (PNS) are a group of conditions that affect the nervous system (brain, spinal cord, nerves and/or muscles) in patients with cancer. The term "paraneoplastic" means that the neurological syndrome is not caused by the tumor itself, but by the immunological reactions that the tumor produces. It is believed that the body’s normal immunological system interprets the tumor as an invasion. When this occurs, the immunological system mounts an immune response, utilizing antibodies and lymphocytes to fight the tumor. The end result is that the patient’s own immune system can cause collateral damage to the nervous system, which can sometimes be severe. In many patients, the immune response can cause nervous system damage that far exceeds the damage done to the tumor. The effects of PNS can remit entirely, although there can also be permanent effects. 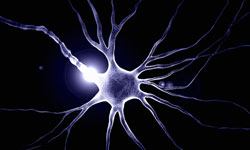 With Decrum's disease, growth on or below skin can irritate nerves and cause severe pain.
3D4Medical.com/Getty Images

Dercum’s disease is an extremely rare disorder characterized by multiple, painful growths consisting of fatty tissue (lipomas). These growths mainly occur on the trunk, the upper arms and upper legs and are found just below the skin (subcutaneously). Pain associated with Dercum’s disease can often be severe. Pain may be caused by these growths pressing on nearby nerves. Dercum’s disease mainly occurs in adults and more women are affected than men. In some cases, affected individuals may also experience weight gain, depression, lethargy, and/or confusion. The exact cause of Dercum’s disease is unknown.

Fahr's Disease is a rare degenerative neurological disorder characterized by the presence of abnormal calcium deposits (calcifications) and associated cell loss in certain areas of the brain (e.g., basal ganglia). The condition is often referred to as idiopathic basal ganglia calcification or IBGC because there is no apparent explanation for such calcification in these brain regions (idiopathic). Associated symptoms include progressive deterioration of cognitive abilities (dementia) and loss of acquired motor skills. As the condition progresses, paralysis may develop that is associated with increased muscle stiffness (rigidity) and restricted movements (spastic paralysis). Additional abnormalities may include relatively slow, involuntary, continual writhing movements (athetosis) or chorea, a related condition characterized by irregular, rapid, jerky movements. In some affected individuals, there may also be gradual deterioration of the nerve fibers that transmit impulses from the retinas to the brain (optic atrophy), a condition associated with partial or near complete visual impairment.

According to reports in the medical literature, Fahr's Disease is often familial. Familial Fahr's Disease may be transmitted as an autosomal recessive trait or, in other affected families (kindreds), may have autosomal dominant inheritance. In other instances, the condition appears to occur randomly for unknown reasons (sporadically). Some experts suggest that the condition may sometimes result from an unidentified infection during pregnancy affecting the developing fetus (intrauterine infection). 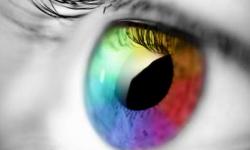 Neuromyelitis optica can cause inflammation of the optic nerve.
©iStockphoto.com/nu_andrei

Neuromyelitis optica, also known as Devic disease (DD), is a chronic disorder of nerve tissue characterized by inflammation of the optic nerve (optic neuritis) and inflammation of the spinal cord (myelitis). There appear to be two forms of this disease. In the classical, but less common type, there is a series of attacks over a short period of time (days or weeks) but, after the initial outburst, there are seldom repeat incidents. The second form is more common and is characterized by repeated attacks separated by periods of remission. In this form, the interval between attacks may be weeks, months or years. In its early stages, Devic disease may be confused with multiple sclerosis.

Tardive Dyskinesia (TD) is an involuntary neurological movement disorder caused by the use of dopamine receptor blocking drugs that are prescribed to treat certain psychiatric or gastrointestinal conditions. Long-term use of these drugs may produce biochemical abnormalities in the area of the brain known as the striatum. The reasons that some people who take these drugs may get tardive dyskinesia, and some people do not, is unknown. Tardive dystonia is a more severe form of tardive dyskinesia in which slower twisting movements of the neck and trunk muscles are prominent. 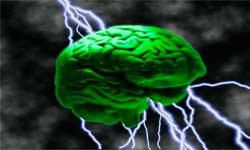 Landau Kleffner syndrome (LKS) is characterized by the loss of comprehension and expression of verbal language (aphasia) in association with severely abnormal electroencephalic (EEG) findings that often result in seizures.

Alpha-1 Antitrypsin Deficiency (A1AD) is a hereditary disorder characterized by low levels of a protein called alpha-1 antitrypsin (A1AT) which is found in the blood. This deficiency may predispose an individual to several illnesses but most commonly appears as emphysema, less commonly as liver disease, or more rarely, as a skin condition called panniculitis. A deficiency of A1AT allows substances that break down protein (proteolytic enzymes) to attack various tissues of the body. This results in destructive changes in the lungs (emphysema) and may also affect the liver and skin. Alpha-1 Antitrypsin is ordinarily released by specialized, granular white blood cells (neutrophils) in response to infection or inflammation. A deficiency of Alpha-1 Antitrypsin results in unbalanced (relatively unopposed) rapid breakdown of proteins (protease activity), especially in the supporting elastic structures of the lungs. This destruction over many years leads to emphysema and is accelerated by smoking and some occupational exposures. 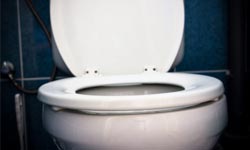 Cyclic vomiting syndrome (CVS) is a rare disorder characterized by recurrent episodes of severe nausea and vomiting. An episode may last for a few hours to several days and then is followed by a period of time during which affected individuals are free of severe nausea and vomiting. This alternating pattern of disease and disease-free periods distinguishes cyclic vomiting syndrome from other similar disorders. The associated nausea and vomiting can be severe enough to be incapacitating (e.g., individuals may be unable to walk or talk and/or be bedridden). Additional symptoms that are often present during an episode including paleness of the skin (pallor), lack of energy (lethargy), abdominal pain and headaches. In some cases as children grow older, they may outgrow these episodes, although many of these children eventually develop migraines. Cyclic vomiting syndrome affects children more often than adults. In adults, episodes occur less frequently, but may last longer. The exact cause of cyclic vomiting syndrome is unknown. 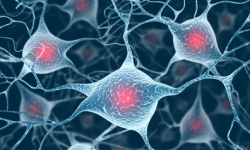 Spinal muscular atrophy (SMA) is a group of inherited disorders characterized by a loss of certain nerve cells called motor neurons. Motor neurons transmit nerve impulses from the brain or spinal cord (brainstem) to muscle or glandular tissue. The loss of motor neurons leads to progressive muscle weakness and muscle wasting (atrophy) in muscles closest to the trunk of the body (proximal muscles) such as the shoulders, hips and back. These muscles are necessary for crawling, walking, sitting up and head control. The more severe types of SMA can affect muscles involved in feeding, swallowing and breathing. 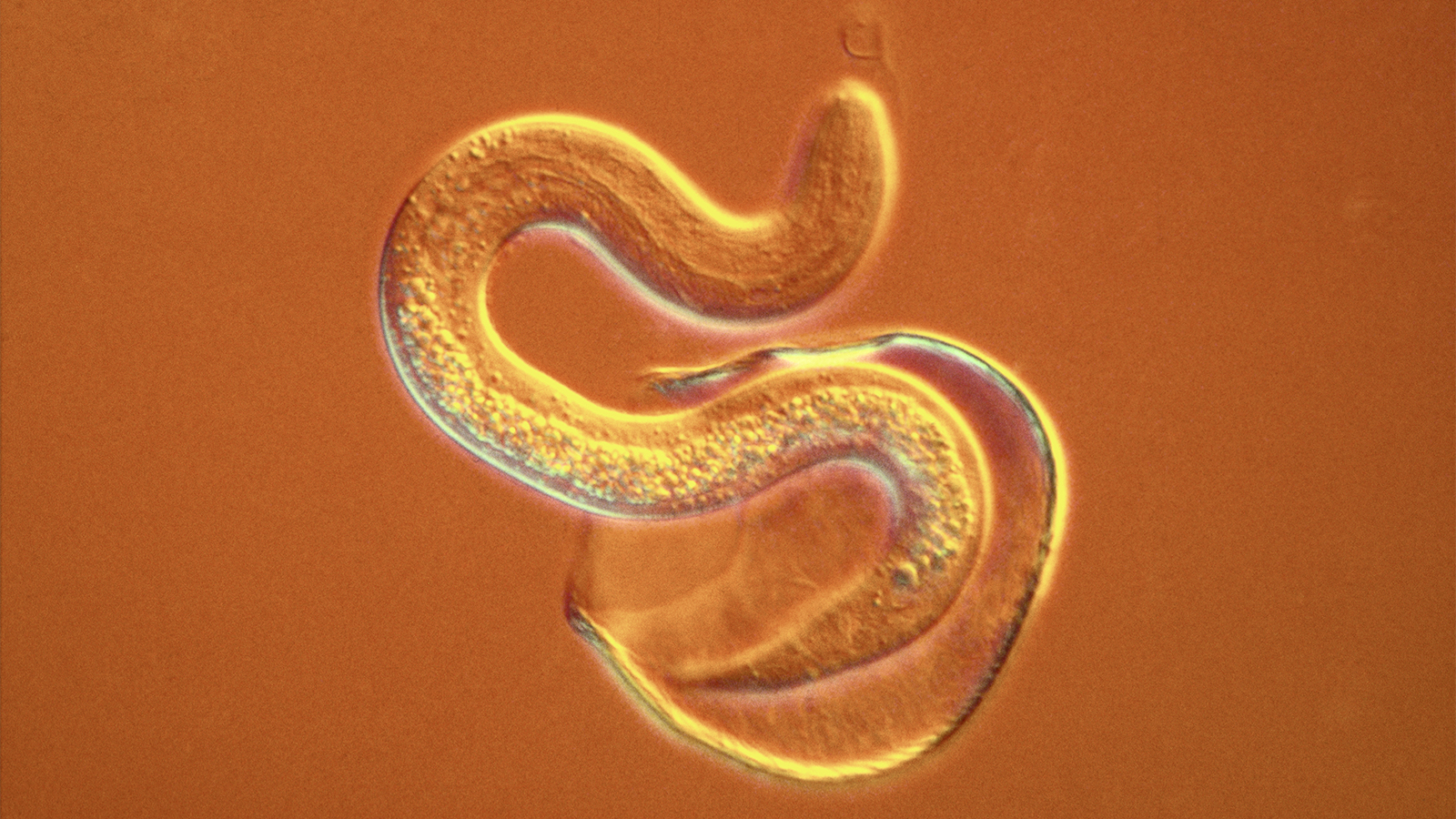 When you were a kid, your mom probably told you not to go around barefoot because you could get worms. But are nematodes still a problem today?