by the Editors of Publications International, Ltd.
Prev NEXT
4 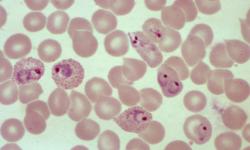 This disease is a parasitic infection of the liver and red blood cells. In its mildest forms it can produce flulike symptoms and nausea, and in its severest forms it can cause seizures, coma, fluid buildup in the lungs, kidney failure and death. The disease is transmitted by female mosquitoes of the genus Anopheles. When the mosquito bites, the parasites enter a person's body, invading red blood cells and causing the cells to rupture. As the cells burst, they release chemicals that cause malaria's symptoms.

About 350 million to 500 million cases of malaria occur worldwide every year. About 1 million are fatal, with children in sub-Saharan Africa accounting for most of the deaths. Other high-risk areas include Central and South America, India and the Middle East. Malaria is treated with a variety of drugs, some of which kill the parasites once they're in the blood and others that prevent infection in the first place. Of course, if you can avoid the parasite-carrying mosquitoes, you can avoid malaria, so the disease is often controlled using mosquito repellent and bed netting, especially in poor countries that can't afford medications.