Browse the article 4 Signs You're Infected With a Parasite 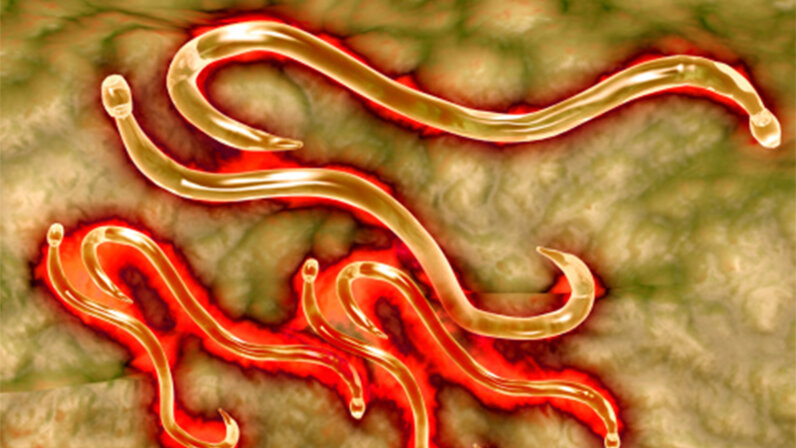 Try a free puzzle of this image!

A microscopic view of hookworms, which are parasitic nematodes that live in the small intestine of the host, typically a mammal such as a dog, cat or human. Stocktrek Images/Getty Images

Self-professed "gut obsessed" functional medicine healer, Victoria Albina, FNP-c, MPH, was sick for most of her teens and twenties, struggling with unrelenting gastrointestinal symptoms that doctors just couldn't diagnose. "I had what was diagnosed as irritable bowel syndrome (IBS) because they had tested me for everything else they could at that time and didn't find anything else," she says.

Despite 10 conventional stool tests that all revealed "normal" results, Albina strongly felt there was something else at the root of her symptoms, which included gas, bloating and a long list of alternating bowel issues that she just couldn't make sense of and didn't believe to be IBS. After working with a naturopath and completing years of her own medical education to earn a nurse practitioner license, Albina finally got the confirmation and validation she was looking for. Through alternative testing methods her gastroenterologist hadn't administered, she discovered that, in addition to a bout of small intestinal bacterial overgrowth (SIBO), she had "a particularly gnarly little parasite called Blastocystis hominis."

Otherwise known as b. Hominis, the microscopic organism is one type of parasite that can live on or in the body and wreak havoc. But, there are so many different types of parasites, many of which live in the intestines, (roundworms and tapeworms and hookworms, oh my!), that the symptoms can run the gamut from unexplained weight loss to unbearably itchy skin. And while parasitic infections in humans are most common in developing countries, hundreds of thousands of Americans are exposed to and infected by various parasites every year. Infections can come from a variety of sources, including animals, blood, food, insects and water. In some cases, the symptoms may be mildly uncomfortable, and in others they can be deadly. Working with a provider or team of providers you trust can help expedite your route to the right treatment plan.

Once she had a tangible diagnosis, Albina worked with her naturopath to tackle the issues through medications, food and lifestyle modifications, and stress reduction through breathwork — all of which she said made a huge impact on her healing. Now the New York City-based nurse practitioner, wellness coach and podcast host helps others tackle all sorts of thorny issues, many of which manifest in the gut, but can show up in other areas too.

"Parasites can be so sneaky," Albina says. "Sometimes the only sign may be skin concerns (like eczema or psoriasis); joint pain or discomfort (including a triggering of rheumatoid arthritis by certain parasitic-behaving bacteria); mood changes, especially when depression or anxiety don't respond to therapy or other modalities; insomnia or sleep disturbances; metabolic concerns like stubborn changes in weight and blood sugar deregulation."

If you have a gut feeling something is off in your physical or mental wellness, she says a parasite could be the culprit. Here are some telltale signs to watch for:

It's important to know that many conventional gut experts and dieticians do consider IBS to be a true diagnosis with specific criteria including chronic but on-and-off abdominal pain and irregular bowel movement patterns. But many also believe that IBS doesn't explain every gut issue, and some of its hallmark symptoms are also characteristic of other problems, like parasitic infections. Here are some of the common gut symptoms related to parasites:

2. Feeling Like You're on a Mood and Energy Roller Coaster

"My first signs of having a parasite infection was depression and anxiety, along with the more classic gas, bloating, indigestion and changes to bowel movements," Albina says, noting that many of her patients with parasitic infections also report symptoms of depression and anxiety. Experts also say fatigue, exhaustion and sleep problems, including insomnia and trouble falling or staying asleep, have also all been associated with parasitic infections.

3. Skin Issues Outside of Your Norm

"Many of my patients with parasites experience eczema, psoriasis and histamine intolerance," Albina says. "So migraines and period symptoms can actually be because of parasites." While gut parasites have certainly been associated with allergy-like symptoms and other dermatological concerns, it's important to know that not all parasites live in the intestines — some set up shop right in the skin, and can have a direct impact from their location on the body. Skin mites (scabies) and lice are two types of parasites that affect the skin, scalp or hair, and can cause intense itching, inflammation and/or redness.

"There's also significant scientific evidence and ancient wisdom that shows us when people are under significant stress not managing their minds well, stress can reduce the quality, quantity and diversity of good bacteria within the gut," Albnina says. "So a simple drug-based approach — for example, 'you have b. Hominis, so take Alinia — that's never really going to work unless you make sure the patient is not eating foods that are irritating or inflaming the gut and that their immune system is well bolstered. So much of it comes down to immune function so the body can kill off the bugs and keep them at bay."

It's true — treating a parasite doesn't necessarily mean eliminating it for good, and Albina says that to increase the odds of living a parasite-free life, healthcare providers need to widen their lens on health and patients ought to get familiar with their own bodies and learn to advocate for themselves when something feels off.

"Based on my own experience and my patients' experiences, the reason people with parasites stay sick, even after treatment, and why parasitic and bacterial infections — because they often go hand in hand — can go away and then come back is that conventional practitioners aren't looking at the full human in their environment," she says. "They're not asking about the person's balance of hydrochloric acid in the stomach or asking what the patient is eating, which could be having an effect on the gut microbiome, or whether they're getting sufficient amounts of prebiotics to help fight off infections."

Learn more about parasites in "This Is Your Brain on Parasites: How Tiny Creatures Manipulate Our Behavior and Shape Society" by Kathleen McAuliffe. HowStuffWorks picks related titles based on books we think you'll like. Should you choose to buy one, we'll receive a portion of the sale.

Now That's Interesting
More than 40 million people in the United States may be infected with a single-celled parasite called Toxoplasma gondii that can originate in undercooked or contaminated food or cat feces — the infection can be particularly dangerous for pregnant women, which is why expectant moms are cautioned against cleaning litter boxes.