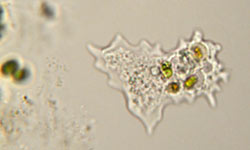 Many amoebas are utterly harmless, but their microscopic size makes it easy for both harmful and benign ones to invade the human body without detection.
©iStockphoto.com/Nancy Nehring

A parasite is an organism that depends on another organism -- a host -- to live. While your mind may wander to a relative who always needs a favor (or a loan), we're talking about the non-human kind. Worms, amoebas and the like.

There are a few types of parasites that cause disease in humans. Some make a home inside you, such as trichinella spiralis, the roundworm normally contracted from eating raw or undercooked pork that causes trichinosis infections. Others are exterior pests, such as a flea sucking your blood. Whether inside or out, parasites are separated into three primary groups: protozoa, helminths and arthropods.

Parasitic protozoa are single-celled organisms so small you need a microscope to see them. They like to eat bacteria and other microbes, and often they live harmoniously with us in our intestinal tract. Some types cause disease, though, such as the protozoa Plasmodium, which causes malaria. Helminths are the second type. These are worm parasites, such as tapeworms and pinworms, and are a bit bigger than protozoa. Arthropods, the third, aren't parasites themselves, but these insects and spiders are common hosts of parasitic diseases.

Most parasitic infections happen in warm climates; for example, Southeast Asia or other tropic or sub-tropic parts of the world. One of the most common parasitic infections is malaria, which kills an estimated 1 million people every year worldwide, mostly in sub-Saharan Africa. Usually, the parasites' goal is not to kill the host, although that can happen, but a parasite relies on that host for its survival, after all, so why intentionally ruin a good thing?

In the United States, the picture looks a little different from the ones in tropical areas, although parasitic infections are still a concern. The most common parasitic infection in the U.S. is trichomoniasis, a sexually-transmitted disease caused by the protozoan trichomonas vaginalis, with about 7.4 million cases occurring every year. Giardia, a protozoan that causes intestinal problems, follows, causing an estimated 2 million infections every year. And cryptosporidium, a protozoan most often picked up during recreational water sports and activities, rounds out the top three list by causing 300,000 infections per year [source: CDC].

The parasites we're interested in, however, are not these common ones, but their rare counterparts. These are the ones that might not have treatment. The ones that just might make you think twice about how you cook your food or where you swim. Let's kick this parasitic party off by introducing spargana, the parasite that causes sparganosis infection.