What’s safe to pack in your unrefrigerated lunch? 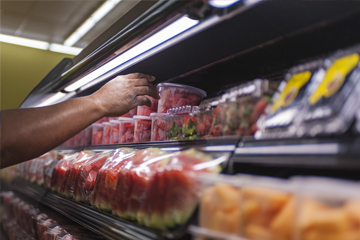 As a rule, if you bought the food out of a refrigerator case, it should stay refrigerated.
Liam Bailey/Getty Images

Parents of school-age children, lunch-toting office workers and would-be campers probably all have had the same thought as they prepared meals that would sit at room temperature for hours or days: Will this be safe to eat later? It's hard to tell sometimes which foods will last and which will spoil. Are there any foods that are always OK to put in an unrefrigerated packed meal?

A food-safety review: Along with moisture, oxygen, acidity and something to eat, the microorganisms that give us food poisoning need enough time and the right temperature to grow to dangerous levels. Bacteria thrive in temperatures between 40 and 140 degrees Fahrenheit (4 and 60 degrees Celsius) — otherwise known as the "danger zone." That's why refrigerators should be set lower than 40, why hot foods should be kept in warming trays unless they're in the refrigerator, and why nothing perishable should sit at room temperature for longer than two hours.

So, as a rule, if you bought the food out of a refrigerator case, it should stay refrigerated. Anything that's high in protein (dairy products, meat, tofu) or moisture content should definitely be in the fridge. (Yogurt, however, is usually fine left out for a short time because its bacteria cultures actually prevent spoilage.) Raw sprouts need to stay cold, and if you cut melons, leafy greens or tomatoes, they need to get into the fridge, pronto. If you were looking forward to a turkey-and-cheese sandwich and the office fridge is on the fritz, that's probably a no-go.

Then, cold cuts, cheese and sushi aside, what to pack in a lunch bag? There's some gray area even when it comes to pantry foods: Canned food, for example, should be refrigerated once it's opened. Those black beans are probably not a good idea, unless you feel like packing the entire can and cracking it open at your desk. But there's nothing wrong with packing along a small can of tuna or chicken and opening it at meal time. And the pantry offers plenty of other options, too: grain-based foods such as pretzels and bread, nuts and nut butters, jerky or other dried meats, dried or fresh fruit such as apples or bananas, and fresh vegetables.

If you want to be extra safe — or if you're going on a camping trip or long hike — you can always go the MRE route. We're not necessarily suggesting a military-style, ready-to-eat meal, but any camping store will have vacuum-packed, moisture-free meals that don't require refrigeration. Most packaged meals you'll find at the supermarket, such as Lunchables, should be refrigerated.