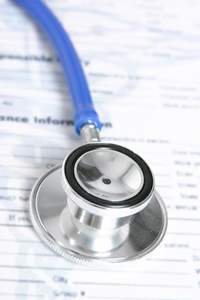 Insurance is a bit like a gamble between you and the insurance company. The company bets that they'll take in more money in premiums than they have to pay out in benefits, whether it's for health insurance, auto insurance, life insurance or homeowners insurance. You're paying a premium every month just in case something happens.

The contract, or policy, spells out what the insurance company will pay for and how much of the bill you will have to pay. For example, the policy may cover an office visit, but you may have to pay a $20 co-payment. Or, the policy may not cover anything until you've paid an agreed upon amount out of your pocket, which is known as a deductible. These deductibles and co-payments, along with any other nonreimbursable expense you may pay is referred to as an out-of-pocket-expense. Other policies may have co-insurance, which is a percentage of the bill that you're required to pay, which may be in addition to your deductible and co-payment. Often, the total amount of co-insurance you have to pay in a given policy is capped by the policy's maximum. The policy will also state the amount you have to pay each month for the coverage, known as the premium, and the total amount the insurance company will pay out for the life of the policy, which is commonly referred to as a lifetime maximum.

Since a single hospital stay could wipe out your savings (and more), not many people can afford to go without some kind of health insurance -- even if they're healthy. Not only will health insurance protect you from bankruptcy in the event of a major medical event, it also gives you peace of mind.

Next, we'll learn about the different ways that you can get insurance coverage.