by Molly Edmonds
Prev NEXT
9 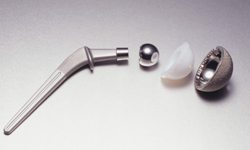 Hip replacements can relieve the terrible pain caused by arthritis. The surgery involves removing diseased bone and cartilage from the hip, and then placing a prosthetic socket and ball that recreates movement in the hip. Some prostheses have a surface coating so that the remaining bone can grow into the implant. Rebuilding the hip wasn't always so easy, though. Early attempts to fashion a prosthesis involved pig bladders, gold and glass, but these materials proved too weak or incompatible with the body.

British surgeon John Charnley is credited with developing the techniques and materials used in the first effective total hip replacement surgery in the late 1950s and early 1960s. His techniques were considered crazy by his peers, but Charnley persevered in his research with polyethylene prostheses. His methods would revolutionize the field of hip replacement, and they also had an impact on this list's next item.