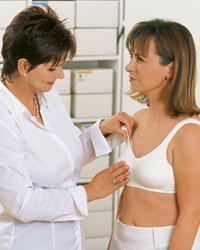 A fitter with Amoena, a company that provides breast reconstruction materials, works with a woman who will have her breasts rebuilt.
Associated Press/PR Newswire

A mastectomy, or the removal of one or both breasts, is a common treatment for breast cancer. Women who undergo the procedure often worry about how they'll look afterward, and breast reconstruction can provide immense psychological benefit and restore confidence to these women. There are several methods for rebuilding the breast. Doctors can use implants or the patient's own tissue to rebuild the breast so that it matches the other one; if both breasts were removed, doctors can use photographs to replicate what the woman had to begin with. Some mastectomies don't require the removal of the nipple, but if the nipple is removed, doctors can replace this as well. They'll use a small flap of tissue to rebuild the nipple, and then they rely on medical tattooing to shade the nipple and the areola.