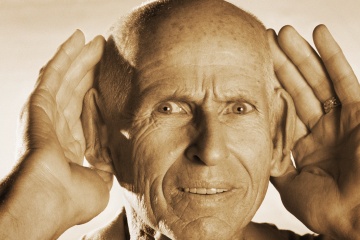 Yet another thing to look forward to as you age: longer ears. Optional: growing long ear hair to match.
© Corbis

After a 9-year-old boy underwent surgery in the United Kingdom, he was all ears. Well, he at least had two. Kieran Sorkin was born without ears, a rare medical condition that affects just two in 200,000 infants and leaves them without a developed outer ear [source: Keating]. Sorkin had surgery to remove pieces of cartilage from six of his ribs, which were refashioned into ears and sewn onto each side of his head. Doctors implanted hearing aids during a previous surgery.

In a few years, doctors may be able to manufacture ears from living tissue in a lab. U.S. scientists in have successfully made a human-shaped ear from animal cells and implanted it onto a rodent [source: Keating]. The big question is whether these artificial ears would continue to grow throughout a lifetime.

As long they don't have a rare hormone imbalance, humans basically stop growing at the end of puberty and the onset of adulthood. A person's bones will not get any longer, for example. But this doesn't hold true for all body parts such as the nose, which continues to grow in a protruding fashion. Like the nose, the ears are composed of cartilage and will continue to get bigger through your lifetime. In a study published in the December 1995 British Medical Journal, the width of participants' ears did not increase over time, but the length did -- by as much as 0.22 millimeters (0.0087 inches) a year [source: Juan].

During the early to mid-1990s, there was some debate about whether only men's ears continued to grow. Some believed that women's ears remained static and didn't show the expansion and droop that men's ears did with each ensuing birthday. However, a 1999 study conducted at the University of Milan in Italy found that both men's and women's ears became longer with age. Any size discrepancies between the sexes were due to the fact that men were typically born with longer ears in the first place [source: Juan].

Some researchers believe the reason ears enlarge with age is that cartilage continues to grow. Others believe that, in addition, gravity causes ears to sag over time. Whatever the cause, otoplasty, or cosmetic surgery of the ears, is one of the leading procedures requested by teens. No word yet on whether they'll need to repeat the procedure at 70 [sources: Juan, American Society for Aesthetic Plastic Surgery].