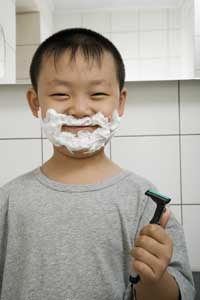 Grooming your body hair can seem like cutting the grass in the summertime. You devote an afternoon to the chore, and the next thing you know, the grass has shot up and you're hauling the lawn mower outside again. When landscaping your body, there are eyebrows to tweeze, mustaches to trim and coiffures to condition daily. The average man spends more than a month out of his lifetime shaving his beard [source: The Economist]. Women hunch over their legs with razor in hand for hundreds of hours to meticulously strip away of thousands of unwanted hairs.

While the hair we see on the outside of our bodies may appear to be actively growing, the real action takes place below the surface of our skin, or epidermis. Cells inside of our hair follicles divide and multiply, and as space fills up inside of the follicle, it pushes older cells out. After those older cells harden and exit the follicle, they form the hair shaft. The shaft is mostly comprised of dead tissue and a protein called keratin.

But human body hair doesn't grow indefinitely -- if that were the case, you'd probably look a lot more like Cousin Itt from "The Addams Family." Instead, individual hairs go through active and resting phases. The process of cellular division that increases the length of the hair shaft is the active, or anagen, phase. The anagen phase continues for a period depending on the type of body hair, then slows down for the resting, or telogen, phase. Since your hair is made up of dead matter, it falls off during the telogen phase. These varying durations of growth explain why the hair on your head grows longer than your arm hair. Your body hair's anagen phase usually lasts only a few months, while your scalp's phase lasts a few years.

Differences in growth phases, hair follicle size and shaft density also define the different types ­of human body hair. In the womb, fetuses are covered in tiny hairs called lanugo. Shortly after birth, babies grow vellus, or fine, unpigmented hairs, across the body. When puberty hits, vellus hairs give way to coarser terminal hairs in places such as the underarms and genitals. The longer, thicker hairs on your scalp, eyebrows and eyelashes are also terminal.

Tally those body hair categories on the average person, and it adds up to around 5 million individual hairs. Wouldn't life be simpler if you were just bare everywhere?

Compared to most mammals, humans are relatively bald. We're certainly the most hairle­ss of the primates. Only a handful of other mammals are as sparsely covered with body hair, including elephants and rhinoceroses. Since elephants and rhinos spend a lot of time submerged in water to stay cool, having little hair makes sense. In exchange, they have thicker skin to prevent too much heat from escaping their bodies.

Put a man next to a chimpanzee -- our closest genetic relative -- and the man's body appears much more exposed [source: National Human Genome Research Institute]. But rather than having fewer hairs, the distinguishing factor is the size of them. In fact, humans have around the same density of hair follicles across the body as other primates [source: Barlow]. The two species also share the same hairless body parts: the lips, palms and soles of the feet. Yet, human body hair is finer and shorter than chimpanzee hair.

­So why, during the course of human evolution, did humans shed their thicker primate coats? At some point, thick hair must have become more of a burden than an asset, and scientists have determined a number of potential answers as to how that came about. One theory proposes that early man was a water-dwelling ape, and less hair was better suited to his aqueous environment. Another explains it as an adaptation to prevent the spread of parasites, since they thrive in thicker fur. Others point to the milestone of bipedalism that occurred around two million years ago. By standing erect instead of on all fours, humans expose only one-third of their bodies to direct sunlight [source: Barlow]. With that posture, a full fur covering wouldn't be necessary for protection from the sun.

Whatever the evolutionary trigger was, the sum of those adaptations has left humans with sporadic body hair patterns. Our heads, underarms and genitals have thicker patches, while places like the back generally have sparse coverings. Though it may seem random at first, there's a method to this mane madness.

If you get tired of having to shave regularly, consider how much maintenance you'd have to perform if you had hypertrichosis. Also known as werewolf syndrome, hypertrichosis is characterized by excessive body hair in abnormal places.

Women can also develop hirsutism, or body hair growth in places where men usually grow it. For instance, a woman with hirsutism might grow a beard or chest hair. The condition is typically caused by a female having an abnormal amount of male hormones. 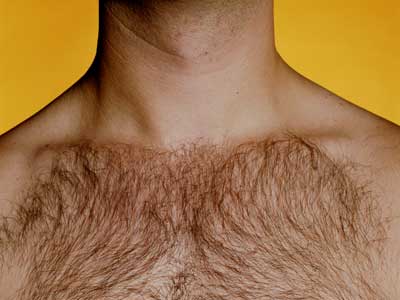 Why doesn’t your tongue get infected when you bite it?
Why Do We Do a Little Dance When We Have to Pee?
How Your Heart Works