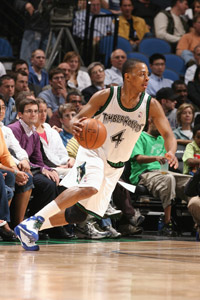 When you look in the mirror, you see a transposed image of yourself. Now imagine having supernatural powers or x-ray vision and looking into your mirror image to see your internal organs. This is how your organs may look if you had reversal of organs. When a person's internal organs are reversed, they appear on opposite sides of the body than they typically are. Also called situs inversus, this puzzling and intriguing condition occurs in just 0.01 percent of all people. It's seen equally in males and females [source: eMedicine].

In many cases, reversal of organs won't lower a person's life expectancy or harm his quality of life. That's why some people never know they have this condition. It can be diagnosed by accident -- an incidental finding in an unrelated medical procedure, like an abdominal surgery. Situs inversus and other related disorders can also be diagnosed through x-ray, ultrasound and CT scan. Using ultrasound, doctors can detect reversal of organs while a fetus is still in the womb.

Most of the time, there's no way and no need to treat reversal of organs. Entire organs can't be switched, but accompanying disorders or abnormalities may require treatment.

We still don't know exactly what causes the condition. Scientists only know that a mutation appears in the genes of people whose organs are reversed, but the specific cause of the mutation and its nature are unknown.

Before we explore this medical mystery further, let's cover some related medical terms:

Let's look at some examples and variations of this rare birth defect. 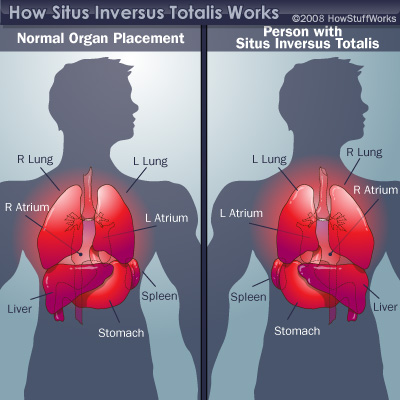 Dextrocardia with situs solitus is a congenital condition in which the heart is located on the right side of the chest but all other internal organs are in their normal positions. One slight difference in anatomy is that normally the left lung is smaller than the right lung in order to accommodate the heart. With dextrocardia, the right lung is smaller. People can still live normally and have no symptoms of dextrocardia, although an attentive doctor should notice the position of the heart during a regular physical.

Although some people live with no symptoms of dextrocardia, others may suffer from additional congenital heart abnormalities. One common abnormality is transposition of the great arteries. Normally, the left ventricle, the stronger portion of the heart, pumps blood to the entire body. But in this case, it pumps blood next door to the lungs. Meanwhile, the weaker right ventricle, which normally pumps blood to the lungs, is left to pump blood to the rest of the body. Doctors would notice this as soon as a baby is born because the child's skin color looks bluish. This condition -- known as blue baby -- happens when a baby doesn't have enough oxygen, but it can also happen for reasons other than transposed arteries.

A potentially dangerous form of organ reversal is situs ambiguus (sometimes spelled situs ambiguous). Like dextrocardia with situs solitus, situs ambiguus occurs in one in 20,000 births [source: Fuster, et al]. Usually, the liver and stomach appear on the right and left sides of the body, respectively. But with situs ambiguus, both move toward the center, and the stomach develops behind the liver.

Aside from the liver and stomach, there's the matter of the spleen. Someone with situs ambiguus can also have bilateral rightsidedness or bilateral leftsidedness. With rightsidedness, both sides of the body look how the right side normally looks, causing asplenia -- or no spleen. With leftsidedness, a person has polysplenia -- spleens on both sides of the body. Having no spleen can increase the risk of infection. Polysplenia boosts the chance of rupturing a spleen during an impact or accident causing dangerous internal bleeding. With or without a spleen, 90 percent of situs ambiguus sufferers have congenital heart disease. Some may also have dextrocardia [source: Fuster, et al, Wilhelm].

Reversal of organs is a rare condition that very few doctors and scientists understand. The good news is that many people born with it lead active lives. However, someone whose organs are reversed may also suffer from other complications.

For more information about reversal of organs and other related topics, please see the links on the next page.

Thank you to Dr. Rachel Gutkin and Dr. Gary Gutkin for their assistance with this article.