What's earwax made of? 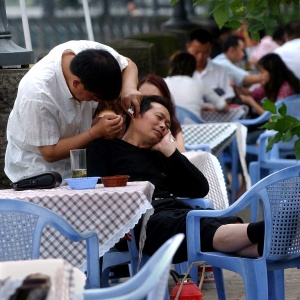 A Chinese man has his earwax picked by a chiropodist at an outdoor tea house in Chengdu, China. Contrary to what many people believe, there's no need to remove earwax unless it's impacted.
© CHINA PHOTOS/Reuters/Corbis

It might seem weird that humans produce wax. After all, that's typically considered the domain of bees. But as anyone who's ever used a cotton swab knows, human ears generate a fair amount of the substance.

While earwax is usually detected in the outer ear, it's actually made in the ear canal (between your outer, visible ear and your middle ear). This section of the ear is lined with wax-producing cerumenous glands. Earwax — also known by its technical name, cerumen — is primarily created by those glands. (Sebum, a fatty secretion of the skin, and dead skin cells also contribute to the makeup of earwax.) It's usually made up of about 60 percent keratin (a protein), with the rest a combination of dead skin cells, fatty acids, cholesterols and other compounds [source: Guest et al.].

Earwax has the same basic composition in each person, but the substance itself can differ in color and texture. People who originate from northeastern Asian countries like China and the Koreas are more likely to have dry earwax. Dry earwax can be hard and red to black in color, or it can be flaky and have a pale yellow shade. For most everyone else, earwax tends to be gooey and ranges from a yellowish-orange to reddish-orange hue.

You may be wondering what you can do about this icky wax. The answer is "nothing." Earwax is another one of the human body's many inventive methods of protection. It serves as a sticky trap for debris and bacteria that try to enter the ear. In addition, earwax is self-cleaning. It eventually falls or flakes out of the ear.

So unless there's an excessive buildup of wax in your ear (in which case you should see a doctor), you should leave the substance be. Devices like cotton swabs, while seemingly handy for earwax removal, can actually cause damage to the ear by either pushing earwax deeper into the ear or introducing additional debris, like loose cotton, into the ear canal.

We have lots more information about ears and earwax below.