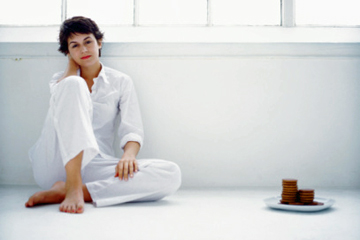 Skipping a meal is one thing, but fasting is a conscious decision to abstain from eating altogether.
George Doyle/Stockbyte/Thinkstock

Eating is an essential part of life. Of course, it provides nourishment for the body, but it also brings people together and helps establish a cultural identity. Food plays a part in many aspects of public life. Curiously, though, people sometimes express themselves not when they eat, but in when they choose not to.

Fasting is an intentional abstinence from eating for a period of time. The word comes from the Anglo-Saxon word faesten, which meant "to hold oneself from food." Fasting has been practiced for thousands of years as part of religious ceremonies. Christians, Jews, Muslims, Confucians, Hindus and adherents of other religious faiths observe fasts. In Native American ceremonies prior to discovery of America, fasting was frequently used to induce fertility and was believed to help cure certain diseases. Babylonians were known to observe fasts as penance for sins committed in the eyes of God. Jews fast on special holy days as a form of atonement and purification.

People fast for health and political reasons, too. And some people use the word to indicate a self-imposed restriction on their diet, for example using terms like "fruit fasting" and "cheese fasting" to show that they're cutting out certain foods -- though that's not really what the word means.

In this article, we'll look different types of fasts and the reasons behind them. We'll also take a look at the effects of going without food on a person's health. On the next page, we'll start with those who fast as a matter of faith.

Fasting is a part of many active faiths around the globe. So what is it about this custom that has caused so many to adopt it? Scholars believe that many people view fasting as a way to initiate or maintain contact with divinity. This may be because when people choose not to eat for extended periods of time, they may hallucinate or have visions. These visions may be interpreted as a path to the spiritual world and to a deeper connection with the divine.

But the hunger that accompanies a fast is also often used in various religious circles as punishment for sins. People of different faiths ask God for forgiveness of their misdoings and maintain a fast for numerous days or even weeks as a sign of remorse.

Some religions ask followers to fast in order to control their desires, exhibit willpower, understand the sufferings of Christ and, sometimes, to feel the pain of those in poverty. For all these reasons, and perhaps for many others, fasting remains a popular practice among the faiths of the world.

Buddhists usually fast on full-moon days and other holidays. For them, the point is purification and freeing the mind. Buddhists observing a fast must abstain from solid foods, although liquids are permitted.

Eastern Orthodox church members fast on Lent and observe both the Apostles' Fast and Nativity Fast. They believe the practice strengthens resistance to gluttony and opens a person to God's grace. Participants can eat no meat, dairy, eggs or fish.

Jews fast on Yom Kippur -- the Day of Atonement. The practice is observed to atone for sins and/or special requests from God. Eating and drinking is forbidden from sundown to sundown for a 25-hour period.

Mormons fast on the first Sunday of each month. They believe fasting helps them achieve closeness to God, and concentration on God and religion. Fasting requires abstaining from food and drink for two meals and donating food and money to the needy.

Muslims fast as part of the observance of Ramadan, the 9th month of the Muslim calendar, which commemorates the month when Koran was first revealed to Mohammad. During this period, Muslims abstain from food, drink, smoking, profanity and sex from sunrise to sunset.

Fasting during Ramadan is intended to teach Muslims patience, modesty and spirituality. During the month, Muslims ask Allah for forgiveness from sins, pray for guidance and aim to purify themselves through good deeds. Ramadan fast is well known due to its length and for the large number of Muslims that participate annually.

Now that we have an understanding of fasting for religious purposes, let's take a look at medical fasting in order to understand how the medical community uses food abstinence. 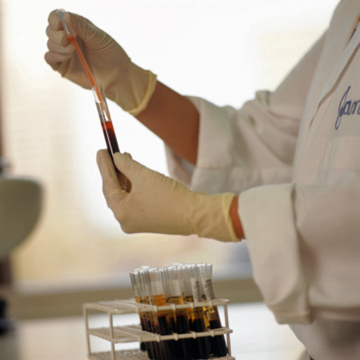 Eating shortly before a blood test may skew the results, so it's likely that your doctor will ask you to fast for a brief period to ensure an accurate result.
Keith Brofsky/Digital Vision/Thinkstock

Although you may not be aware of it, chances are you're familiar with medical fasting. Abstaining from food is frequently a requirement for contemporary medical procedures such as cholesterol screenings, blood sugar checks and major surgeries.

Fasting in medicine serves a very specific purpose. Eating before a blood test, for example, may interfere with the test results until your body can completely digest the food you consume. Because cholesterol and other blood tests check the level of fat in your blood, the food you eat and the resulting fat it adds to your blood stream can produce misleading test results.

Fasting before you go in for blood work gives the doctor a clearer picture of any indicators that may be present in your blood. If your fat (lipid) levels are high in a fasting state, then you may be at risk for high cholesterol and all of the health problems it can cause: heart disease, stroke, heart attack, blocked arteries and more.

Fasting is also a common practice before major surgery involving anesthesia. When patients who have eaten recently go under anesthesia, there is the potential that they may vomit and inhale their stomach contents, which can be deadly [source: Cox] Thus, any patient who's due for surgery in the morning is usually instructed not to eat anything the night before. However, this practice may become outdated soon, as researchers are finding that regurgitation during surgery is quite rare. Furthermore, fasting is often associated with adverse effects, such as hunger and dehydration, and can also cause headaches, dizziness and nausea in some people.

When a person stops eating for more than a few hours, the body looks to stored forms of energy to function normally. If you don't eat protein, your body starts to break down your muscle (which is protein) in order to get the necessary amino acids (the building blocks of protein). A long-term fast can damage your heart, which is a muscle, as well as your liver and kidneys, which can decrease in size, if you don't consume enough protein. Insufficient protein will also impair the functions of these organs.

Some medical procedures that typically require fasting include:

One might think that avoiding eating would be a good way to lose weight, but is it healthy? Although there are many opinions on this subject, several things seem evident. Fasting can be effective for fairly quick weight loss. After all, eating less reduces the number of calories the body receives. Because we use the calories in the food we eat for energy, once the body stops taking in more calories it starts using up its stored fat deposits.

But that doesn't mean that fasting is a good way to lose weight. Studies have shown that people who fast sporadically -- a few days here, a few days there -- generally put the weight back on when they go back to their usual way of eating. Thus, fasting is effective for quick, temporary weight loss, but does not work as a long-term weight loss solution. Modern medicine has also repeatedly found prolonged fasting to be unhealthy for the human body. Not eating causes blood sugar levels to drop. That, in turn, can lead to above-mentioned headaches, dizzy spells, nausea and disorientation. Fasting decreases one's metabolic rate; in other words, the body realizes that it's being starved and tries to conserve energy and calories. After the fast is over and you go back to regular eating habits, the hormones that regulate your appetite may push you to eat more [source: WebMD].

More importantly, fasting for prolonged periods of time is not considered safe. The reason for that is the fact that the body needs various vitamins and minerals to function and stay healthy. Without these minerals, you'll probably feel tired and dizzy, and you may have trouble fighting off colds.

In the next section, we'll take a more in-depth look at the various effects of fasting.

Anorexia nervosa is an eating disorder in which people have an intense fear of gaining weight. People with this disorder drastically reduce the amount of food they eat and become catastrophically thin. Anorexia affects the body and the mind, causing skewed body perception. If not treated, anorexia can become a lifelong problem.

Throughout history, people have used various methods for making their political statements heard. Fasting -- or going on hunger strikes -- has also been used as an effective way of getting one's message across. Hunger strikes are a non-violent method of trying to achieve a certain point or exerting pressure on the governing body.

Hunger strikes have been fairly effective in achieving the goals of the one fasting. For example, Mohandas Gandhi used fasting to protest a British proposal for a new Indian constitution that would perpetuate the caste system in politics [source: History.com]. His hunger strike message was heard around the world and brought much publicity to this important issue.

In 1981, Bobby Sands died at the Maze prison in Northern Ireland after fasting for 66 days. According to the BBC, his hunger strike demands included a request for republican prisoners to regain lost remission; that they should be able to wear their own clothes; that the prisoners should have time to socialize, visit and mail; and that they shouldn't have to do penal work as part of their sentences. Nine other prisoners died and more than 60 others perished in the violence that followed. James Prior, the Ulster secretary, met the prisoners' demands to be able to wear their own clothes and to receive 50 percent of their lost remission time for three months' good behavior [source: BBC].

Another famous hunger strike -- the 40-Hour Famine -- is an annual event in Australia, where participants give up food and drink and donate to various children's charities. This event has been highly publicized and gained recognition worldwide. What has made past hunger strikes particularly successful was having masses of people participating. Major universities around the world have gone on hunger strikes – thousands of people – in order to prove a particular point.

Also, having well-known individuals take part in political fasting can draw great attention to the message being addressed. Such was the case with Gandhi.

Why do farts stink?
Doctors Provide Yet Another Reason to Never Hold in a Sneeze
Half the World Will Be Nearsighted by 2050