by Samantha Sestanovich Apr 20, 2017
Drinking an entire gallon of milk in one sitting is a challenge often undertaken, infrequently accomplished. Why is that? John Greim/LightRocket/Getty Images

Have you ever had a strong desire to almost undoubtedly make yourself throw up? If you're like most people and say “no thank you” to the possibility of making yourself get sick, then you probably have minimal desire to try the what's become known as the gallon of milk challenge. But if you are the type who cannot resist a test, then this might be the one for you. On this episode of the BrainStuff podcast, host Christian Sager explains why this challenge is pretty much impossible.

The premise of the challenge is simple: Participants drink a gallon milk as fast as they can, and then attempt to hold it down for an hour without puking. It seems simple, but the success rate of this challenge is incredibly small. Lots of people have tried it and miserably failed, as YouTube is quick to document, but is it impossible? No: just really hard and kinda gross.

But what makes this challenge so difficult is the interesting part. Drinking a gallon of anything in a short period, even water, is dangerous. When you drink a gallon of water, it overloads the body's circulatory system as well as the kidneys, diluting blood electrolytes and causing cells to swell. That can even potentially cause brain damage or death. Most people who attempt to drink a gallon of milk in one hour vomit for a number of possible different reasons.

The first explanation one might assume involves lactose. That's a milk sugar, and the human body can only handle a certain amount of it. To process lactose, the body needs the enzyme lactase to break it down. People who are lactose intolerant have difficulty processing any lactose, and in severe cases could throw up from drinking just one glass of milk. But lactose intolerance, instead of being a stomach issue, is really an issue of the large intestine. Lactose gets digested in the small intestine, so those with lactose intolerance face issues in the large intestine when lactose is consumed by bacteria, causing gas and diarrhea. So lactose in milk really isn't what's preventing people from holding the milk down.

But the main reason why this challenge is nearly impossible comes down to stomach size. An average human can only hold about a half-gallon (1.9 liters) of anything in their stomach. When you push past that boundary, the stretch receptors in your stomach are triggered which induces emergency-overload vomiting.

The truth is that the only people who can reliably complete this challenge are professional eaters. Chugging a gallon of milk is difficult, but a gallon of anything would prove to be a bit messy.

Now That's Interesting
It takes about 650 squirts from a cow's udder for a dairy farmer to collect a single gallon of milk. 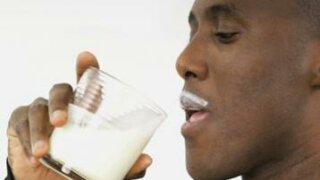 Is milk good for you?

What 'Percentage' Is Whole Milk? 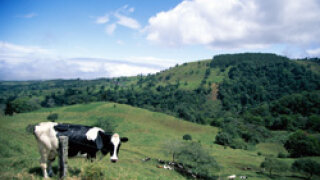 How to Milk a Cow