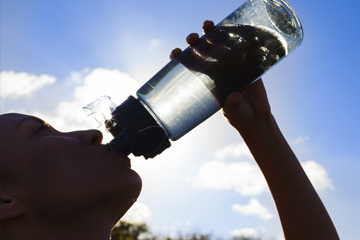 Most of your body's major systems depend on water to function, so drink up!
kieferpix/Thinkstock

You've just finished one heck of a kettlebell workout, and you're slick with sweat. You've already downed all the water in your 32-ounce refillable bottle, so it's time for a refill. You're just guessing, but it feels like the liquid went right through you -- in the form of perspiration. But what else does water do for your body?

Turns out, most of your body's major systems depend on water to function. In fact, water is a big part of who you are: It comprises up to 60 percent of an adult's body weight [source: New Health Guide].

Your body relies on water to act as a courier system. Water transports nutrients to every cell in your body and then carries away waste products from cells. When you digest food, the nutrients become water-soluble and then enter the circulatory system, borne on blood that is 92 percent water. As your body produces cell waste, your body's water-based fluids move the waste from cells, and lubricate the kidneys to cleanse the body of toxins. Water also keeps bowel movements running smoothly to rid the body of additional waste.

Water's benefits don't stop there. Your body uses it for a plethora of other functions, too. It's a big part of the fluid that surrounds, cushions and lubricates joints. And, water fuels the fluids that create saliva, and moisten the mouth, nose and other mucus membranes [source: New Health Guide].

Water is vital to the brain's health and functioning, too. A 2013 study of water's effect on mood and brain performance by researchers at the University of East London and the University of Westminster found that participants who drank more water -- about 775 milliliters -- had faster cognitive responses. The participants who didn't drink the additional water also reported faltering moods. They were more likely to be sad, confused and tense [source: Edmonds et al.].

Other studies have shown that even mild dehydration makes it more difficult to pay attention and stay focused and that it can hamper short- and long-term memory functions. Most of the time, we receive our daily water intake from beverages. An additional 20 percent comes from food, and the body produces a negligible amount as it turns food into energy. However, the amount of water your body needs to function can change on a day-to-day basis. Marathon workout? You're going to need to boost your fluid intake.

One way to gauge whether you're drinking enough water is to monitor urine output. If your urine is clear and relatively odorless, then you are well hydrated. Dark yellow urine is a sign that you need to drink more water or eat more foods with a high water content, such as grapefruit or watermelon [source: Cilona].

10 Things That Affect Your Weight Besides Food and Exercise
How does alcohol make you drunk?
Hyponatremia Explained