How the Endocrine System Works 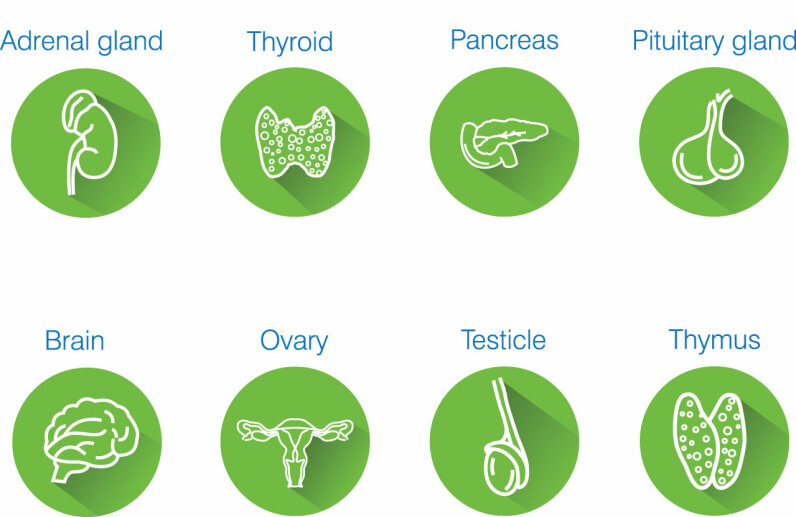 The endocrine system coordinates the activities of the organ systems. The pituitary gland at the base of the brain is the master gland. LEOcrafts/Getty Images

The endocrine system comprises a number of glands that produce hormones with a varied array of vital functions. Hormones are chemical substances that are secreted by organs or by cells of organs in one part of the body and are carried by the bloodstream to other organs or tissues, where they control or regulate the development or function of those structures.

Endocrine glands are also called ductless glands, because they secrete hormones directly into the bloodstream. In contrast, exocrine glands release their secretions through ducts (for example, the sweat glands produce fluid that flows to the skin's surface through tiny tubelike sweat ducts).

Hormones can be considered chemical messengers. They are targeted at specific cells in the body, and their arrival in those cells causes specific activities to occur.

One of the major tasks of hormones is to coordinate the activities of organ systems. For example, when a person has to run, the hormone epinephrine acts on the heart to increase its rate and force of contraction; it acts on the blood vessels to increase blood flow to the muscles and decrease blood flow to the gastrointestinal tract. Hormones also help control the type and rate of body growth and metabolism, and they help the body maintain a consistent internal environment.

The endocrine system has a large influence on the way we feel and act. In turn, our energy and other needs in any given situation set the activity of the endocrine system. This feedback relationship is crucial in maintaining our general well-being.

Components of the Endocrine System

The endocrine system consists of glands that release vital hormones into the blood. Let's review the major types of glands or parts that make up this system.

There are more than 30 steroid hormones produced by the adrenal glands. These hormones serve to regulate a wide array of processes throughout the body. Epinephrine and norepinephrine are responsible for the changes in heart rate, blood pressure, and level of usable glucose (a form of sugar) that are necessary to cope with stress.

The pancreas is located in the rear center of the abdominal cavity, behind the stomach. Specialized cells in the pancreas produce two hormones, insulin and glucagon, needed to maintain stable blood sugar levels in the body. Insulin helps body cells use glucose for energy, thereby reducing the amount of sugar in the bloodstream. To balance this action, the hormone glucagon stimulates the liver to release its stored sugar into the blood, thereby raising the blood sugar levels.

The pituitary gland is a small organ located just beneath the base of the brain, between the two frontal lobes and directly above a cavity called the sphenoid sinus. It is sometimes called the master gland because all other endocrine glands come under its control. Its job is to receive messages about the need for a particular hormone and to secrete either the hormone or substances that cause the manufacture and release of the hormone.

The anterior (front) lobe of the pituitary gland secretes somatotropin (growth hormone), which affects the body's general growth; thyrotropic hormone (thyroid-stimulating hormone), which acts on the thyroid gland to stimulate production of thyroid hormones; adrenocorticotropic hormone (ACTH), which stimulates the adrenal cortex; follicle-stimulating hormone and luteinizing hormone, which are necessary for maturation and release of egg and sperm cells; and prolactin, a hormone that acts on the mammary glands to promote the secretion of milk.

The posterior lobe of the pituitary gland secretes oxytocin, which stimulates smooth muscle tissue to contract (and is of critical importance during childbirth) and vasopressin, a hormone that regulates by acting on the kidneys.

The primary responsibility for hormone production for the reproductive system lies with the testes (male sex glands) and ovaries (female sex glands).

The testes are two oval organs in the scrotum (the pouch of skin behind the penis). The testes produce sperm and sex hormones that govern the male secondary sex characteristics, including the growth of facial hair.

The two ovaries are located in the pelvis. The ovaries secrete the hormones estrogen and progesterone, which govern ovulation (monthly release of an egg from an ovary) and the female secondary sex characteristics, such as breast development.

The thyroid gland is located at the front of the neck above the top of the breastbone. It consists of two main lobes on either side of the trachea (windpipe) that are connected by a narrow band of tissue called the isthmus. The hormones secreted by the thyroid influence the rate of metabolism (the chemical processes in the body having to do with energy production).

The four parathyroid glands are located on the back and side of each lobe of the thyroid gland. Their secretion, parathyroid hormone, controls calcium levels in the blood.

The endocrine system is one of the most important processes of the body. Understanding the system's components can help you understand how the human body works.

Diseases of the Endocrine System

Hormone levels that are too high or too low in the endocrine system can cause diseases. One of the most common is diabetes. Diabetes occurs when the pancreas doesn't produce enough of the hormone insulin or else it can't use insulin properly. Insulin is what carries sugar from the bloodstream into cells. Another common disease is hypothyroidism, which happens when the thyroid gland is overactive. Many hormone imbalances can affect the reproductive system, like Polycystic ovary syndrome, which results from an overproduction of androgens and often causes infertility. Other endocrine-related diseases include Graves' disease, Cushing's disease and Addison's disease.

'Man Flu' Could Be a Real Thing
What determines the rhythm of your heart?
How Your Kidneys Work